I sit all day so I never look for a seat on the subway. I prefer to stand. But I agree with Jake Dobkin who wrote the following guideline for giving up your seat:

But the other day he wrote that you should also give up your seat, “If someone asks you for your seat … Why? Because academic psychologists have determined that asking is “extremely difficult, even traumatic,” and no one would do it if they didn’t actually need the seat …”

When I was in my twenties I was on the subway one day and I suddenly felt like I was going to faint. It was very crowded, there were no seats, and I asked the woman nearest me if I could have her seat. I felt so embarrassed asking but I was getting dizzier by the second. She said NO!! I was shocked because I thought it was fairly obvious I was in distress. It was so hard asking one person I just didn’t have it in me to ask another and so I knelt down on one knee on the subway floor and leaned into the doorway. In my nice office clothes (this was when people dressed up for work).

No one asked me if I was okay, no one offered me their seat. I wondered if they thought I was kneeling on the filthy subway floor for fun? Dramatic effect? It was pretty heartless. I couldn’t believe it. For the record, people in NYC will usually offer help in situations like this. I almost fainted again not long after this, on the street, and people swarmed around me trying to help. (It turned out to be a reaction to medication I’d started taking.) Those people in the subway car, I don’t know what was wrong with them.

The moral of my story: don’t say no when someone asks you for their seat. They probably have a very very very good reason.

More Halloween decorations. I thought this one was pretty funny. Rats!! Oh, I just remembered. Today is the children’s Halloween party in the Bleecker Street Playground. I should try to get some pictures. 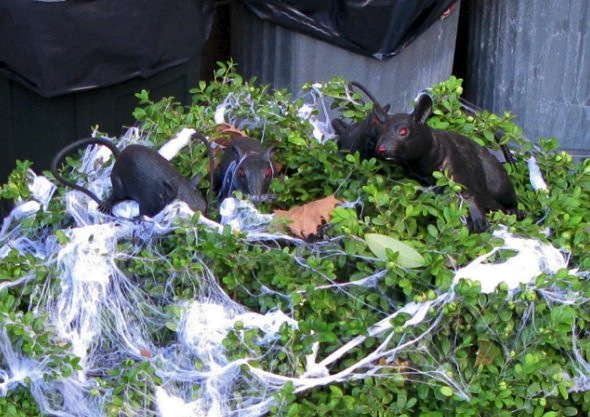 I Need to be More Selective about my Reading