I loved this blizzard so much it made it into my book Waiting for My Cats to Die. I’d just seen this lovely movie, After Life (Roger Ebert gave it four stars). In it, everyone who dies goes to a place where they have to pick one memory, and that memory will be the only memory they take with them when they go wherever it is that dead people go.

So I wrote down my favorite memories, trying to pick which memory I’d take with me, and the blizzard of 1978 was one of the memories I considered (in the end I couldn’t pick one memory, I loved too many). It’s such a simple, small memory, but it stood out for me at the time. I was 20 years old, and even though I couldn’t see more than a couple of feet in front of me I just had to walk from my apartment on Chatham Street into Harvard Square, a five minute walk normally, but I think it took me maybe an hour, the drifts were so high. You couldn’t see where cars were parked. The snow accumulation was so enormous I was walking down the street at a level higher than the tops of the cars!

I’d never been in a blizzard before, I just loved it. It was scary but exhilarating. When I got to Harvard Square, everything was closed of course, except Buddy’s Sirloin Pit, my favorite restaurant. Even better, it was packed with people like myself, people who couldn’t resist seeing what it was like to be out in a blizzard. I wrote about pouring A1 sauce all over my meat and wolfing it down while the room steamed. (I’m a vegetarian now, so this is funny to read.) But I’d built up such a tremendous appetite trudging through those drifts, and fighting wind and snow that was coming at me at what felt like all directions at once, never letting up. It felt like I was in a hurricane of snow. I’d engaged in a battle with nature and had won!

Mayor de Blasio just declared a state of emergency and announced that traffic in the City will be closed at 11pm to all but emergency vehicles. I think I might have to be out and about to see that, if I’m still awake.

The calm before the storm. This is looking down onto the street from my apartment window. My friend Jackie says I wouldn’t love the snow so much if I had to talk a dog. It’s hard to see but this guy is walking a little dog. 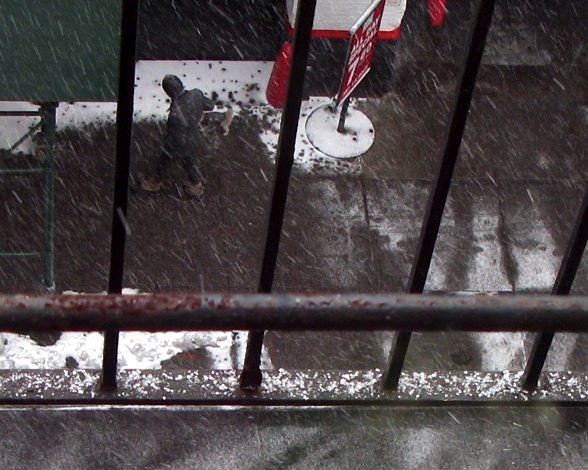