Prices came down enough for me to finally get my first smartphone. First I learned that phone companies were giving away older iPhone models, Verizon gave me a model 5C for 99 cents! But the monthly data plans costs are lower. So I took removed all services from my landline, essentially making it an emergency-only device, and joined the 21st century.

The first week I felt like a stumbling, bumbling, visitor from the days when telephones weighed 20 pounds and you could throw them out the window and they wouldn’t break (it’s true, we all tried it). I got a little happier when I saw how easy it was to text message, access voice mail, and make phone calls. But I got truly excited for the first time when I downloaded an app called ScannerPro.

With ScannerPro you scan the pages, which it does so well it goes quickly, and then it automatically converts it into a 50 page pdf, which would be enough to dance in the streets about right there, but then with a tap you can upload it to Dropbox (or Google drive or email, et.) and you’re done!

The first time I used it I practically sobbed. I scanned 240 pages of documents, called out “I’m done!” and blew the librarian’s mind. She was sure this would take all day at the very least.

Later I saw someone buy a cup of coffee by simply holding up their phone in the direction of the cash register. Now I’m learning about contact-less payment. And Apple Pay, except you need an iPhone 6 damnit. Already I’m behind! But I don’t care. I love the 21st century!!

What other apps should I explore? What are your favorite apps?

A very scary Easter Bunny in the window of a West Village … I think it was a barber shop. 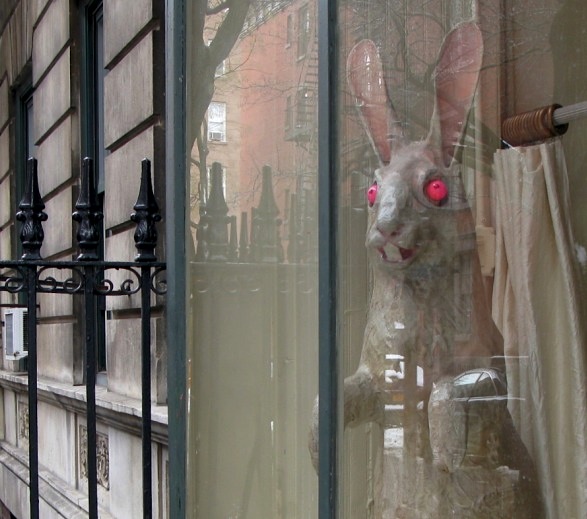