In order to put off buying a new computer for another year or two (hopefully) I did everything I could to soup up my late 2008 MacBook. I maxed out the RAM, then I got a new, bigger hard drive and battery (thank you, Kevin!). This was supposed to enable me to install the OS Mavericks, but that is no longer available and running Yosemite on this machine is iffy.

So I installed Mountain Lion, which sent me straight to computer hell for a couple of days, forcing a clean-ish install, and, because I had to put them together from what I had in the house, a few very odd meals. But I emerged with a computer that feels like a brand new computer to me, and although it’s not up-to-date with something like Mavericks, it feels like I might get the extra year or two I needed. And, I was able to buy a wireless printer to replace my old HP which broke months ago. I can print again!

That was a very geeky post, I know. Here’s my little Bleecker, resting from tormenting Finney and crying for pets from me (don’t worry, I pet him all the time). 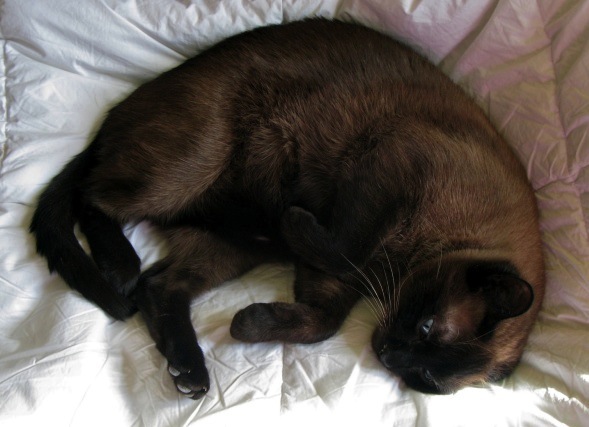 “It is every artist’s secret …”

Oh God, Could I be a Bigger Idiot?