I am against the death penalty. Not only is it not a deterrent, this will create more killers.

But most of all, I would prefer a response of mercy and grace. I felt like this after 9/11. I would prefer to show the world that we are better, or that we can be. After 9/11 I wanted to respond by building hospitals and schools in the areas occupied by terrorists.

I realize gestures like this would be lost on some people, those too far gone, but I genuinely believe that if this is what we’d been doing for the past 14 years, in addition to limited military response to address those too far gone, we would not be in as bad a mess all over the place the way we are now.

Sentencing Tsarnaev to death demonstrates that we’re out for blood, just like they are. To those who would say we are only responding to his acts, he killed first, Tsarnaev and others would say that they are only responding to ours. You can go back and forth forever, like a bunch of global Hatfield and McCoys. Someone has to stop and rise above it.

I bought myself a bunch of lilacs, to celebrate my fabulously clean apartment. And because pictures of flowers can be boring, I got Bleeck and Finney in the shot. 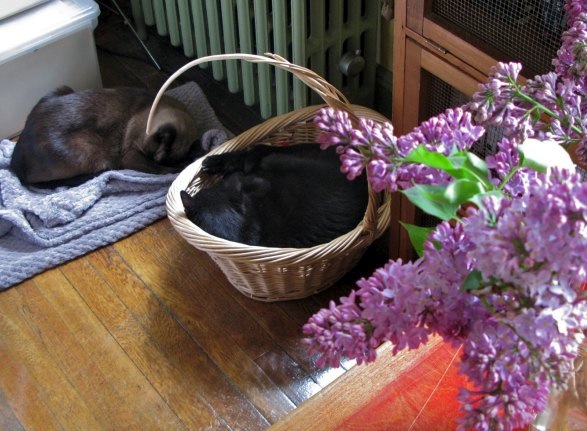 Why oh Why Can’t I Marry Them??