So exhausting. At one point a young girl walked in and said she was told a judge had ruled at 2pm that people registered as independents could vote in the New York primary. It seemed insane that we wouldn’t have been hearing that all over the place, but I called the Board of Elections, who said “no way,” and then I googled it to see if it was in the news. Nope. But I tried. I like seeing younger people passionate about voting. I think there was low turnout among young people during the last presidential election, wasn’t there?

I tried to think how the rule that only democrats and republicans can vote in the democrat and republican primary here in New York may have come about and I came down to two guesses. One, why should you get a say in who my party nominee is if you are not in my party? Two, people outside the party could sabotage the process by voting in a candidate who is less likely to win.

Love the stencil of the top half of Bernie’s head. This was at the top of the stairs to the subway. 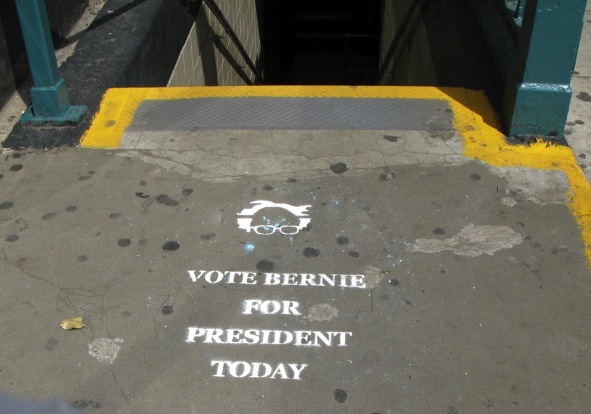