I signed up to sing with the choir at the Mostly Mozart festival premiere of David Lang’s The Public Domain. From the website:

“In the spirit of the Mostly Mozart Festival’s conception, the world premiere of the public domain by Pulitzer Prize winner David Lang will be a performance that not only welcomes the public as a free and open event, but will also be performed by the public. A piece inspired by the theme of the collective knowledge shared amongst us all, the composition will be performed on Saturday, August 13, by 1,000 volunteer vocalists from throughout New York City, conducted by Simon Halsey, Choral Director of the London Symphony Orchestra.”

You have to attend five rehearsals, and because of these five rehearsals my possible swimming trophy this year is in jeopardy. Except, as far as I can tell only three of us are trying this year, which means third place should be a lock. The same three women try every year, but we usually have some competition. So far I don’t see any.

A puppy up for adoption. 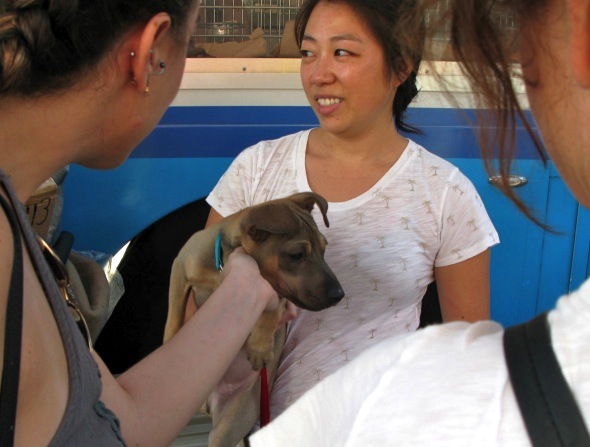 How long will this wreath last?

Pigeon Action on my Fire Escape