Trump is an utter disgrace to the office of the presidency. I feel so bad I can’t bear it. That’s why I’m focusing on positive things I can do to neutralize the Fuckface von Clownstick we’ve just unleashed on the rest of the world. Someone on my Facebook timeline just reminded me that Trump won by a slim majority. Half the country wanted something better for us. Focus on that, focus on that, you are not alone.

Oh God. I’m sorry people of Earth. Trump does not speak for me. I just rescued a spider who was stuck in my bathtub. It made me feel a tiny bit better for a second. That really is key. I have to find a project to make the world better.

But America will no longer be a positive influence in the world. We are diminished. Maybe the fall of the American empire is for the best. Jesus, Mary and Joseph we fucking elected the guy endorsed by the KKK. I’m so ashamed of us. Decency lost. Ugliness won and other countries will continue to rise in power and influence to replace us. I’d be cool if it was Canada.

Shit. I just realized, among all the horrors that are occurring to me and everyone else, forget any movement on climate change. Goodbye earth!

Update: Okay, now I’m reading a bunch of people posting the hope that most of his campaign was all theatre and bluster, and maybe he’ll turn out to be a moderate republican. He was once a democrat.

I passed this sign by on my way back to working at the Tweed Courthouse pollsite. I feel a little bad because I told the guy I wasn’t taking a picture of him, but the sign. Except he’s such an attractive and stylish young man I didn’t edit him out. 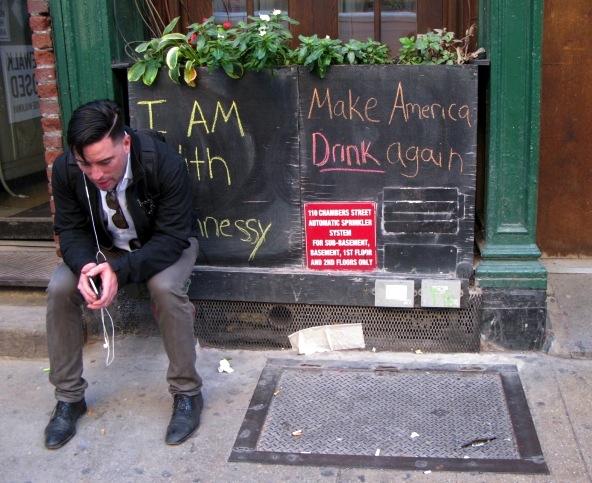 The Deaths of Lynne Carver and Lynn Carver