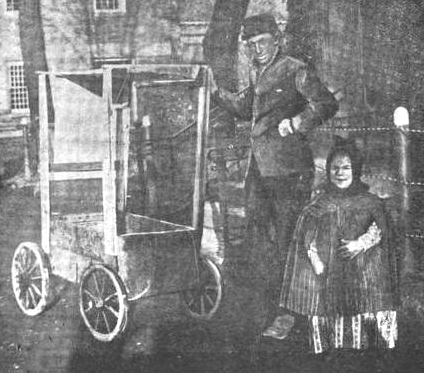 This is Johnny the Horse, an inmate of the Lunatic Asylum on Blackwell’s Island who’d been there since he was a young boy and who believed himself a horse.

With an unraveled rope functioning as a tail, he’d paw the ground like a horse, and deliver packages around the Island while hitched to a crude wooden soapbox style cart pictured here.

Johnny never wanted to leave Blackwell’s, where he slept in a stable at night, and when he was told he was being transferred to Ward’s Island in 1895 he was distraught.

All the patients of the Lunatic Asylum were being transferred elsewhere, but Reverend William Glenney French, the episcopal missionary on Blackwell’s, wrote a letter on Johnny’s behalf, asking that he be allowed to remain, in the only home he’d ever known. When Johnny was told that he was going to be able to stay on Blackwell’s, “he neighed loudly and then started off on a dead run with his wagon around the Island, and did not stop until he had gone around twice.”

Sadly, he was later transferred to the Asylum for the Insane on Ward’s Island and after that to the Central Islip State Hospital. I could find no record of him after that, but presumably he died there.

Happy birthday to me!

2 thoughts on “Johnny the Horse”