I thought I was catching a break with the two kittens I picked up on November 1st. They were healthy, eating well, and had good bowel movements the first day. All I had to do was keep them fed and clean and to play with them. Alright! Cue up kitten heaven. Except they stopped eating so much and started vomiting, they had the worst diarrhea and were steadily losing weight day by day. Poor little monsters.

Pretty soon I was going back and forth to the ASPCA’s Kitten Nursery to pick up different meds and foods to try. Every morning and night I’m poking two to three syringes of something that I’m sure tastes awful into their mouths. It’s amazing they don’t hate me, but seconds later they’re crawling up my leg for attention. This morning their weight jumped up, and their box which is normally full of diarrhea was not! There were no bowel movements at all so I’m waiting to see if the good news is even better and they each have a normal or better bowel movement. But I’m feeling a lot less stressed.

As usual, I’m not allowed to post pictures of them, so here is a shot of their feet. They are two tuxedo babies, a boy and a girl, who were named Hawkins and Havisham (unfortunate name for the girl). 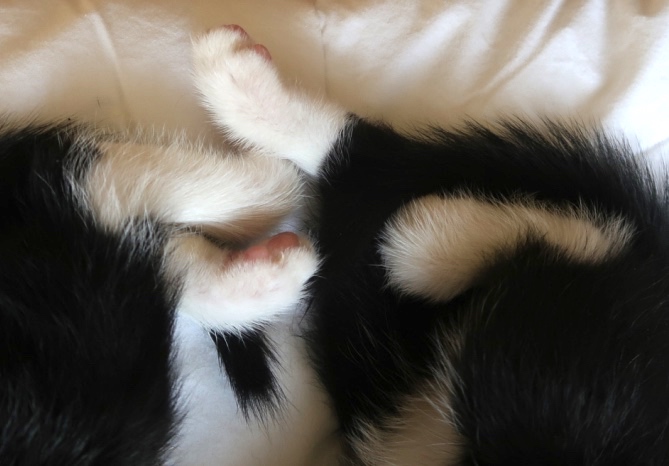