I did a quick check of how my Trump supporting friends were doing yesterday and saw that one of them had posted about a letter from Ted Nugent to Biden, ranting about how dare he call for unity after … and I stopped reading quickly.

First, Ted Nugent cannot lecture anyone about unity and civility. And I thought, no one who supported Trump can lecture anyone about unity after the last four years. Trump did everything he possibly could to sow discord in our country. For eight years before that republicans said that all they cared about was making sure Obama never had a win, not whether or not what he was trying to do was good for the country (these were the republicans in congress, and I hope they weren’t speaking for everyone, but they were speaking for some).

When I start fuming like this on any issue, not necessarily political, what I try to do is imagine myself having this conversation with one of my oldest friends, but I imagine them on other side of whatever it is I’m fuming about. Then I ask myself, how would you discuss it with them? I wouldn’t attack, although I would probably still rant. But I’d expect to be listened to, and I would listen to their rant as well. The important thing is, in my imagination at least, I realize that I definitely do talk differently to them, and if I expect to get anywhere, I should talk to everyone as I would with my friend.

And so I did this with the whole argument about unity. Here’s what I realized. Why go on about who rejected unity first, or was the worst about it? Is that really useful? Like the Hatfields and McCoys, you’re never going to come to an agreement about who started it. Or whose side has the biggest assholes, or caused the most damage. I’m not both-siding it. I’m just saying we’re not going to agree. I do realize some people want to battle to the death and never give up. But not everyone. I hate all the hate. There’s got to be people who didn’t vote for Biden who feel the same. In my imaginary conversation my friend and I agreed we would never agree. Instead, I asked, “How can we fix this?” So if I ever work up to courage to try to start this conversation, I would skip what I said above about Trump and how Obama was treated.

Biden has a lot of experience working effectively with people on the other side of the aisle. I’m allowing myself a little bit of hope. I also think if he can do the things he wants to do, people who didn’t vote for him might be happy with the outcome.

A picture from a New York City snowstorm in 2016. We’ve only had one snowstorm this year, and it didn’t compare. (Another reason to be happy about Biden. Climate change.) 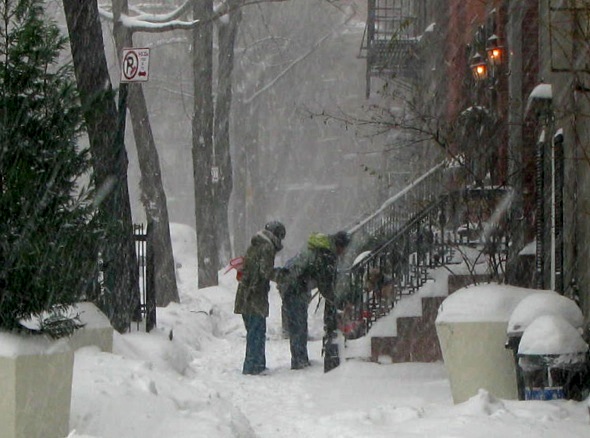 Christmas in the West Village, 2017