The other night, on the way to choir, I noticed some dead flowers stuck in the grating and on the stoop, next door to where I buy bread and juice on Hudson Street. One of the cards read “To Jane Jacobs – From Here She Changed the World.” 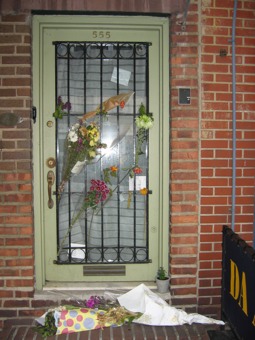 Jane Jacobs died on April 25th. I think it’s safe to say she saved the city I love. (See her book, The Death and Life of Great American Cities.) It’s interesting to think she once lived in this building. When I first moved to this neighborhood it was little iffy this far west. The nearest AA meeting used to be filled with longshoreman who would curse at you if you were the least bit … non-longshoreman-y. (Meaning show any emotion whatsoever.) And since she must have lived here before I got here, the neighborhood had to have been even tougher.

Oh God, now Bleeker Street over here looks like Rodeo Drive. The stories I could tell of the things I’ve seen and what it used to be like. The most bizarre sight was when I first moved over here in 1981. There used to be warehouses on the piers over on the Hudson River. I don’t know why, but me and a couple of friends decided it would a good idea to go into one, at NIGHT. (Yes, we were idiots.)

We walked about mid-way through, hearing a noise I just couldn’t identify. It was night, and there weren’t any lights, so it wasn’t until the halfway point that my eyes adjusted and I could see around me. Then I saw the source of the noise. Up and down the entire length of both sides of the warehouse, as far as the eye could see, naked butts going up and down. What I was hearing was the sound of several hundred couples having sex.

Anyway, I loved that people remembered her, and that she used to live in this building and left her flowers and thanked her for our city. (New Yorkers are great. And also out of their fucking minds — see my previous story.)

Goodbye Jane. Thank you from me.

My Pub Date is in Six Days

Yesterday Was No Fun for Me

4 thoughts on “A Tribute”