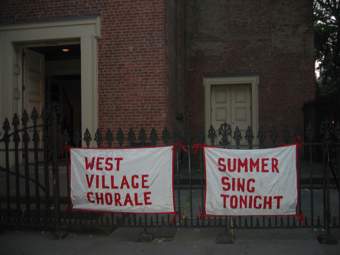 I seem to be on a God theme lately, but one of the best things about God is the music written in his name. I went to a summer sing the other night and we sang Mozart’s Requiem. I’m sure most people already know this, but Mozart died while writing this, and it was finished by one of his students. Normally the transition to the student’s stuff doesn’t bother me, I don’t have the most sophisticated ear, but the other night, for the first time, there were parts that felt like it had been written by a third grader after what we had been singing a few minutes ago.

Speaking of death, I was freaking out about the 9/11 tape they were playing over and over, the one with the woman pleading with the 911 operator, “It’s so hot, it’s very very very hot.” That one. It made me stop and think, okay, just what did she have to endure? And I thought it through, the room getting hotter and hotter and hotter, slowly, it must have been like being cooked, hotter and hotter until you can’t breath and die. The fucking horribleness of it all. This happened to someone. I just simply can’t get used to the idea of what some people have had to endure. Some people get a roll of the dice that is so beyond measure horrible that I can’t comprehend the monumental unfairness, the unthinkable awfulness of it.

I never quite understood why people wanted to believe in Hell, but now I kinda see it. Sometimes you are powerless to prevent or do anything about something unspeakably awful. We may never catch Osama bin Laden and the people who planned 9/11. What is left but to take some comfort in the fact that justice will be served in the hereafter? Except I think that’s ultimately a no-win fantasy, that feeds nothing good in the world. It keeps anger and hate alive instead of neutralizing it. Except maybe that kind of fantasy is just a step towards letting go of the anger.

4 thoughts on “Singing About Death”