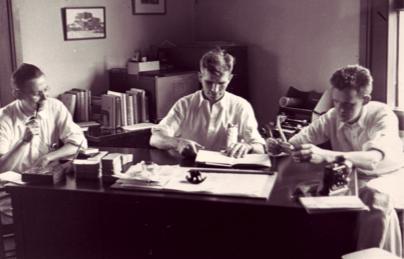 I gave this image the title of “Paraboys.” It’s a picture of Charlie Stuart, J. B. Rhine and Gaither Pratt, the main guys on the staff of the Duke Parapsychology Lab when they began.

It was a discussion of the relative insignificance of ESP now, compared to other abilities and knowledge, that sent me into a bit of a downward spiral the other night. Who knows if we will manage to come up with any kind of significant contribution to humanity, history, the world, in the very short time we’re given. We don’t always get to know that in our lifetime. You do your best, but who knows if you are making the right choices at the time that you are making them?? You could find yourself at the end of your life going, “Uh-oh. It seemed like a good idea at the time.” We don’t know now where the work at the Parapsychology Lab might eventually lead, or if ends up being all for nothing. That’s the kind of thinking that freaked me out the other night. Everything I do might end up being all for nothing. Just one bad choice after another.

I guess that’s why people say love is the only thing that matters. Although it seems I am not the good choice maker in that arena, either. (There’s still time, there’s still time, holy mother of God, tell me there’s still time.) But if you have love, it’s something to point to that’s very satisying, even if you manage nothing else in life.

Speaking of choices, here’s a short video taken at the party I missed because I went to the Loser’s Lounge. That is Anne at the end of the table. Anne is fun.

I just realized, looking at the title on this entry, that according to the Duke guys, I can influence the flip of the coins. So, I may think I’m surrenduring to chance, but maybe there’s no such thing. You don’t get out of the responsibility of choosing. You can’t palm it off on fate.

4 thoughts on “From Now On I’m Flipping Coins”