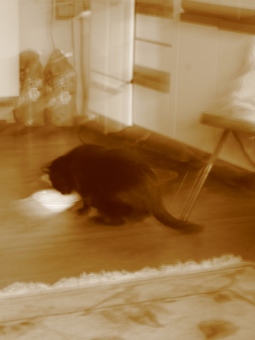 This is kinda pretty, isn’t it? I don’t see using this a lot, but still. Nice.

Movie update! The Departed. Completely engrossing. I had to go to the bathroom at one point, and I was so mad, but I ran there and back, and didn’t miss much. Leonardo Dicaprio — I always think of him as someone I’m not wild about except when I see him in a film, he’s always riveting. And I remember I always think that. I like him in everything I’ve seen him in.

I had a little problem suspending my disbelief. I didn’t research this kind of operation, maybe it’s more plausible than I know (I don’t really believe that) but part of me couldn’t help thinking the whole time that the whole thing never would have gone down like that. People are stupider, generally. Except at times I remember thinking they are not that stupid. Ha! Apparently I just disagree about how people are stupid. Doesn’t matter. This was great.

I can’t decide what to see today. It’s between, Children of Men, Pan’s Labyrinth and Catch and Release.

There’s A Tooth in There! Really!

The Sea of Lost Ships