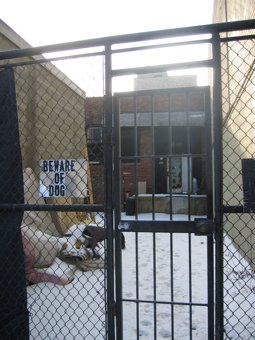 I always promise my friends I won’t put up unflattering pictures, and unfortunately, I don’t like how any of my pictures from Saturday came out. So here is a picture of where Adrienne’s son Josh lives. It’s this little building, tucked at the end of an alley. Do you see that tiny gray door at the center right of the picture? Josh and his roommates live in there. If you walked by you’d wonder, ‘do people live in there?’

But it’s the best building. It has such a wonderful hidden feel and it’s great inside. I’d love to live there. It’s like something out of the book A Winter’s Tale. In the book, Mark Helprin (the author) describes how people in New York at the turn of the century occupied every nook and cranny.

I’ve typed in the part I thought of below. Josh’s isn’t quite like this, but seeing his building made me think of it. Helprin is talking about two girls, called spielers, who take this guy home. First, they have to travel to get there. It’s like an exaggeration of getting out to Brooklyn from Manhattan.

“It took them three hours to get there. They crossed several small rivers and five streams. They wound down a hundred crooked alleys that looked like opera sets. They passed over great bridges, through commercial squares where men ate fire and meat was roasted on swords, and by half a dozen wide doors that led far into smoky factories that pounded like hearts …” It goes on.

Then they kinda get to the spot, but the girls live “… not in the tenements themselves but within the hidden square they formed. They went through a dark whitewashed tunnel and discovered a vast concealed court surround by perhaps a hundred buildings. In the center was a broken garden not yet revived by spring, except for a dense growth of weeds. At it’s edge, dwarfed by the tenements, was a little shack. The spielers lived not in the shack but in it’s basement. They descended through a cellar door and found a small dark room with a tiny window near the ceiling …” And it goes on.

It’s a great book, one of my favorites, although at the same time, too something. The author is embarrassed by it now, I’ve read.

I Don’t Know About the World Ending, But It Sure Is Pretty