While researching the history of music at Grace Church I came across the story of the wedding of Charles Stratton (better known as Tom Thumb) and Lavinia Warren. It was such a nice story I included a brief write-up in my book even though, technically speaking, it didn’t have anything to do with music. However, it does says something about the spirit of the place where I sing.

Some of the members of Grace Church didn’t want the wedding to take place there, and the letters to Rev. Thomas House Taylor were quite ugly. It’s like they thought the couple were somehow less than human (Stratton and Warren were little people). Barnum desperately wanted the wedding to take place in a concert hall so he could sell tickets, but the Stratton’s love was real and not for show or entertainment, and they wanted to get married in a church. Stratton’s letter to Taylor is touching, “we are as God made us … we are simply man and woman of like passions and infirmities, with you and other mortals …”.

Taylor basically told everyone to go to the devil, and Stratton and Warren were married in Grace Church on February 10, 1863. He was criticized for it afterwards. From the Brooklyn Daily Eagle:

“We are surprised that the clergy, or representatives of so respectable a body as the Episcopal Church should, for a moment, allow themselves to be used by this Yankee showman to advertise his business; or that a Bishop should allow himself to be exhibited like the Albino, or the What is it. Should he do so, the fittest place for the exhibition would be the American Museum; and not in a house dedicated to the services of a holy religion. It is bad enough to turn the solemn rites of marriage into a public entertainment for the gaping crowd of morbid curiosity hunters, without profaning the house of God with such an exhibition.”

Taylor wrote, “if the marriage of Charles S. Stratton and Lavinia Warren is to be regarded as a pageant, then it was the most beautiful pageant it has ever been my privilege to witness.”

Don’t you just love this guy??

More bigoted letters were written by the congregation after the ceremony, but good for you Rev. Taylor and Grace Church. Stratton died 20 years later, and Lavinia remarried two years after that. But when she died she was buried next to her first husband, Charles. 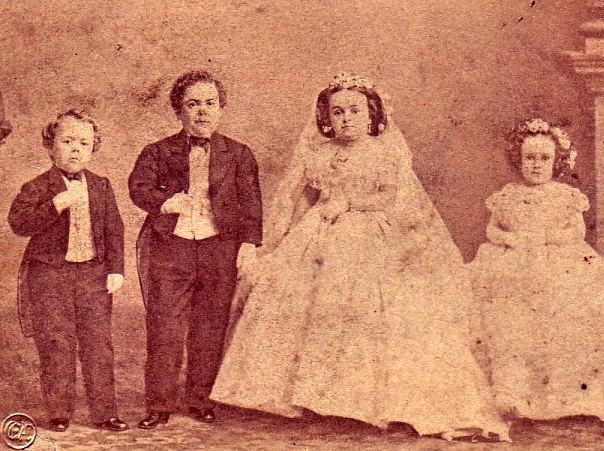 The Holidays HATE Me This Year