What the hell?? My desk make-over is apparently a total flop. I was going to put a nice, tall house plant where the lilacs are now (lilacs are in season, YAY). It would have been quite dramatic and make-over-y. But I decided I prefer buying myself flowers from time to time instead. Oh well.

I’ve been cleaning for two days, and if nothing else, my apartment is nice and clean and relatively organized. I think I might take tomorrow off. That reminds me. I saw two movies recently that I would recommend. The Host and Hot Fuzz which stars the Shaun of the Dead guys who I just adore. I wish they were my friends so I could hang out with them and play video games. (I don’t actually play video games, but it seems like the kind of thing they would like to do and it would be fun with them.) I watch Shaun of the Dead every time it’s on TV. It never gets old. Hot Fuzz was great too, but it’s hard to beat zombies, but still. It was great and totally worth seeing. 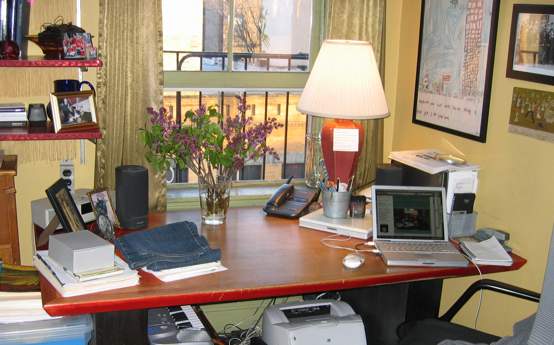