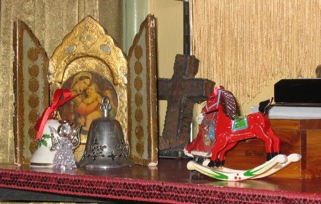 The bells belonged to my mother who used them to wake me up to help her when she was dying. Apparently I can sleep through anything, including a dying mother calling for help. When she was dying of pancreatic cancer I would stay out at her house on Long Island a couple of times of week to help take care of her. We were all taking turns, but in my memory it was mostly my brother Douglas, who was the best at negotiating the healthcare system, and my sister-in-law Karen, who was the best at taking care of my mother personally. Karen just has this way of being so caring, but at the same time acting natural and not freaked out, that was so crucial and comforting to my mother those last few weeks. (Thank you, Karen. I will always be grateful.) Which is not to slight anyone else who was there, and everyone was there more than me, it’s just that we all have different skillsets and I noticed Doug and Karen’s in this situation. But given that I was not there as much as everyone else I probably missed a lot.

Anyway, I was out there one night and my mother had to call and call and call before I finally woke up. It was awful. She was so weak and helpless. She pulled out those Christmas bells and used them to wake me up after that. Ugh.

Oh good lord, I am morbid. But I couldn’t help noticing! I swear I’m actually mostly a happy, upbeat person! I see myself that way anyway. I’ve been singing that Snoopy and the Red Baron Christmas song and everything. Ho ho ho! Deck the halls! I’d have a tree if the cats weren’t so bent on its destruction. I’m afraid they’ll hurt themselves with it somehow when I’m not here.

My Agent Packs the House!

2 thoughts on “A Somewhat Sad Collection of Ornaments”