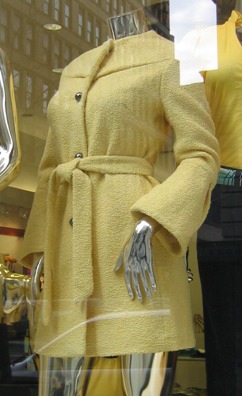 Ever since I bought a yellow shirt last year I realized yellow is my favorite color. The signs were all there, I painted the walls of my apartment yellow, I pick paintings with yellow in them, buy yellow coffee cups, etc. But when I put that shirt on I knew. (I also love various shades of green.) I saw this in a window the other day. Practically speaking, I don’t like coats that tie like that, they wrinkle whatever is underneath, but still. Pretty.

Gas situation update. I saved people lives yesterday!! (Exaggeration alert.) Here’s the story. After they turned the gas off to my apartment, I still smelled gas. I opened the windows, turned on fans, but something still continued to generate that smell. I called Con Ed, and they came back, but they said, “no gas.” I called the EPA, then I called the City who called 911 and soon my street filled with engines and sirens. It was very embarrassing, but turned out well because those cute fireman brought their own gas detector which started squawking when they turned it on and they said, “yeah, you got a leak.” They called Con Ed and said, “she does too still have a leak,” and Con Ed came back and said, “yeah, there’s still a leak, but since we turned you off it’s got to be elsewhere.” (Something I had been saying to them since they turned it off.)

So now everyone in the building is without gas. I had to leave signs up on every floor because apparently someone expressed anger about me to the Con Ed guy and he had to explain that it wasn’t my fault and not in my apartment anyway. I mean for the love of God. Not only is it not my fault, but in my mind we had a potentially dangerous situation which I rescued everyone from. That gas would have kept building and building and maybe BOOM. They should buy me that coat. (Kidding.) But seriously, what did they think?? The only reason I could smell it is because there’s a hole in my floor and it was pumping up into my apartment through this hole. The Con Ed guys said the pipes came up this side of the building and the other apartments they saw were better sealed.

The First Casualty of Christmas

Okay, I went a Little Nuts

3 thoughts on “Clothes I Cannot Possess 4”