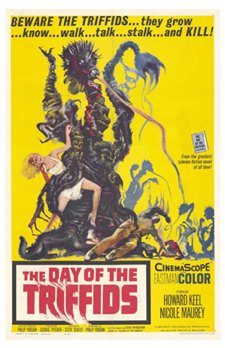 Waiting for The Day of the Triffids to download. This is a BBC series version. I loved the book, loved the old Hollywood movie version, and now I’m looking forward to watching what the BBC does with it. It came up in conversation on Echo when I was talking about the problems with The Happening.

The other day I watched a documentary about the Ramones called “End of the Century: The Story of the Ramones.” I was always ambivalent about punk rock. Loved some of the songs, the fashion, but I remember whenever I went to CBGB’s the anger and the toughness felt fake. A bunch of boys pretending to be bad, except sometimes someone came across as very genuine, but that wasn’t exactly preferable, it was actually sad and scary, but still. The Ramones were everyone’s favorites though, and this documentary was fantastic. And sad.

Sigh. That was my youth, the late 70’s and early 80’s. But the punk rock scene was only my occasional scene. I had my anger like everyone else, and I had friends who played there, but I was still mostly a happy young girl, happy to be in New York City and going to hear live music was pretty much my favorite thing to do in all the world and whenever I was in CBGB’s I had a hard time keeping my smile off my face. I must have stood out like a sore, but twinkling and grinning thumb.