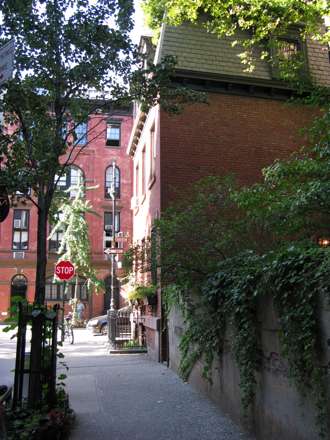 Don’t go to see House Bunny.  I was hoping it was going to be a nice surprise, like Legally Blonde, but no.  Man was it bad.  And just weird. Like it wasn’t made by … people.  I actually thought while watching it that it was made by guys who had never spoken to a woman in their lives, and was surprised when the credits rolled and I saw that it was written, produced and directed by women.  And then I learned later it was made by the same screenwriters as Legally Blonde.

The humor, what passed for humor, just made me cringe.  Don’t go.

But do read The Brief History of the Dead.

And if you missed the new summer show In Plain Sight download it and watch it.

And get the Bridgid’s Abbey cheese from Cato Corner Farm at the Greenmarket (if you’re in New York).

I took this picture on Commerce Street facing Morton Street.  A pretty spot, no?

We Need a Different kind of Pet Death Book