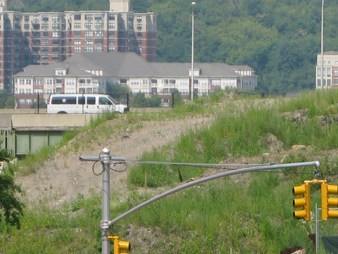 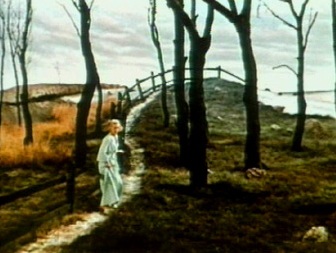 I was so traumatized by the movie Invaders From Mars that whenever I see anything even remotely like it I get the creeps, all these years later.

I took this walking towards the Hudson River.  I was somewhere up in the 70’s, I forget which block (probably due to TRAUMA).

Doesn’t it look a little like the path leading up to the sandpit in Invaders From Mars?  It’s just missing that fence running up along the left.  And trees.  It’s the urban version. This is the best sandpit alien landing pad we could come up with in the city. Seriously, I saw it and immediately thought Invaders From Mars, first thing.  I will never forget that sandpit. Whatever a sandpit is, besides being a good hiding spot for aliens.

I walked back home along the river from an unsuccessful shopping trip uptown.  I had a little adventure along the way, which I will post about. Nothing truly exciting, but I got a nice picture out of it.

I was threatened by someone who either works for the City or the mob. Or aliens. Okay, not aliens.

SQUIRREL!! Or, in this case: PIGEON!!