I saw this video of people outside a Palin rally on YouTube.  What’s worse is there’s many like it. Years ago I thought John McCain was okay.  I didn’t agree with him about most things, but I disagree with lots of people, it doesn’t make them bad.  Recent revelations have indicated that it’s not such a surprise how the campaign has evolved and maybe he had a lot more character flaws than was realized.  And of course the choice of Sarah Palin. But this recent effort of trying to portray Barack Obama as associating with terrorists, and repeatedly saying “he’s different than us,” the wording of which is not so subtly racist, has brought us to this.  More below.

[The video I linked to has since been removed.] 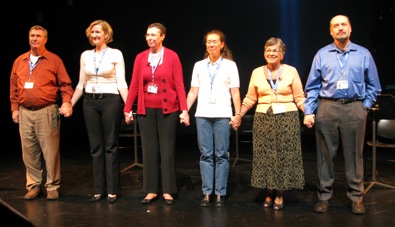 Then last night I went to the theatre piece put on by the September 11th Families Association and the Tribute WTC Visitor Center. These people told the stories of what happened to them on 9/11 and after. Not surprisingly, it was very moving. Chances are if I went up to those people on that line above they would not have given me a chance to tell my story. But the performance underlined how arguing with them or listing facts would probably not work, and perhaps giving them some glimpse of our common humanity might? I don’t know. It’s pretty depressing. How do people get so twisted with hate? What happened to them?? I haven’t had an easy life, but man. The message I took away from this piece was community and love love love. That was what I took away from my own 9/11 experience. Community and love.

I wish the media would report on this more. I’m talking about the McCain campaign rallies and phone calls that are repeating these stories about Obama associating with terrorists and whipping people up into this frenzy of hate. The media has touched on it, but I’m talking that 24/7 thing they do when they get a hold of a story they love. This is just as wrong as it gets. It’s not good for these people, it’s not good for our country.

It’s just another reason why I love Obama. I’m no saint, but Obama wants to bring out people’s best, not their worst. His message is, “We can do better.” That reminds me! That’s another thing the McCain campaign keeps doing. They twist that message into Obama criticizes America and thinks America is imperfect. Give me a break. If your friends or family make a mistake, you don’t point it out? If your kids start heading down a bad path you don’t try to steer them in a better direction? That’s a good thing. One can always do better, aim higher, and we should always be striving to be better, until the day we die.

And I would argue that someone who doesn’t encourage us to do so, to always be greater and to shoot for the stars, doesn’t really love us.

Going on Talk of the Nation on my Birthday

Can you see the metal gargoyle-y things?

3 thoughts on “What to do about ugliness? Or, John McCain, what the hell happened to you?”