I went to the movies in the middle of the day yesterday, one of my favorite things to do. I saw Stranded: I’ve Come From a Plane That Crashed on the Mountains.  I’m not sure the movie was a complete success.  I was into it because I’d read Alive and was curious about these men’s lives now, all these years later.  On that it was very satisfying.  They all live in the same town they were living in as boys, they never left.  And they have remained friends with Sergio Catalan, the shepherd they spotted on a horse when they first came out of the mountains and who went and got help.

Afterwards, when I was googling the story, I was sorry to learn that the survivors were not happy with Piers Paul Read’s book.  From the acknowledgments section: “…when I returned in October 1973 to show them the manuscript of this book, some of them were disappointed by my presentation of their story. They felt that the faith and friendship which inspired them in the cordillera do not emerge from these pages. It was never my intention to underestimate these qualities, but perhaps it would be beyond the skill of any writer to express their own appreciation of what they lived through.”

Yeah.  He was never going to be able to completely see it as they saw it, but if he stuck to the facts, and I didn’t find any complaints on that score, it would still be an accurate picture, just from a different point of view.  And I think he did such an amazing job.  And I think their faith and friendship does come through.

Of course the whole time at the movie, like when I was reading the book, I kept asking myself: would I have survived?  I got the sense that the survivors don’t like to be thought of as heroes, and maybe heroes is not the right label. Nonetheless, I would like to think I had their strength and determination and courage.

I took this picture at the Film Forum while waiting for the movie to start.  “I’m sorry.  I’m playing with a new camera,” I had to say to my fellow film-goers, who were okay with it once I explained. 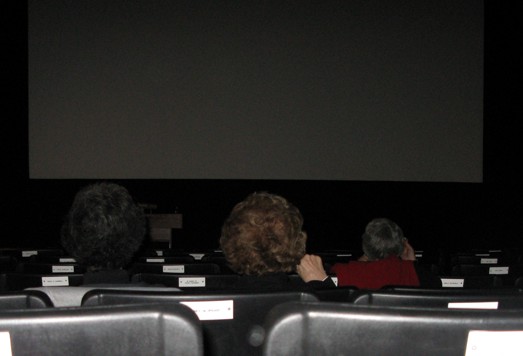 Someone Hide Something Good for me to Find!