Finney is on my lap and I can’t move so this is my view from the desk, looking slightly west. There’s Buddy on the couch, the humidifier is going now that the heat is on—love this new camera, you can see the steam!—new sneakers, blue not red because they are not making them in red anymore, damn them, and to the right on the desk is the book I’m reading now which I love, love, LOVE, A Tree Grows In Brooklyn. Where have you been all my life, A Tree Grows In Brooklyn?

I’m going to the doctor this morning after the cat gets off me.  More below … 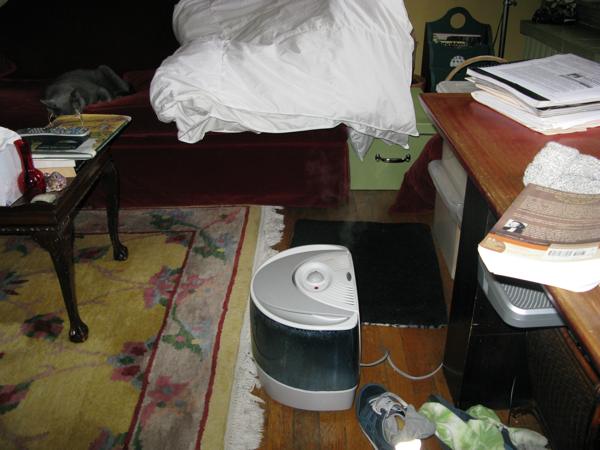 Hopefully it’s nothing.  In fact I’m pretty sure it is, but I’ve had this nagging backache in just one relatively small spot in my back that has been growing. I saw the doctor about this a month or two ago. Here’s the thing: my mother died of pancreatic cancer in 2001, and her only symptom until it got bad was a backache, so I’m paranoid.  I went back to the pancreatic cancer Listserv I joined when my mother was first diagnosed to ask about this and found the very first post I made.  What makes it sad beyond the whole pancreatic cancer thing was my hopefulness about finding trials.  I posted this on March 14. She died ten days later on March 24th. Clearly no trial in the world could have saved her.  I think she was dead within 5 weeks of being diagnosed.

I’ve been lurking for a few weeks on this list.  I haven’t said anything because my mother, who we’ve been told has pancreatic cancer, still hasn’t gotten a formal diagnosis.  They weren’t able to get a tissue sample from the first procedure (although that procedure told that my mother’s liver is clear).  They did a needle biopsy last Friday that gives my mother anxeity attacks whenever she thinks about it.  Are needle biopsies that bad?  She took some Xanax last night for the first time and had a horrible reaction from it.  She hallucinated.  I’ve never heard of such a reaction from Xanax.

Anyway, I wanted to introduce myself.  My name is Stacy Horn.  I live in NYC, and my mother lives in Huntington, LI.  The reason I’m speaking up is because I have a cousin who does cancer research at Dana Farber and I want to share what I learn from him and others.  My cousin does not specialize in pancreatic cancer so he is only sharing what he is able to find out.

But he told me to look into trials for EGF receptor inhibitors and proteasomeal inhibitors.  Apparently there’s some buzz going about in cancer rearch circles about these trials.

Has anyone heard anything about either of these?  I’m looking into them so I will certainly share what I find.

What I remember finding was that my mother was ineligible for every single trial I found.  Now I understand why, it was utterly hopeless, but at the time I couldn’t believe the horror of it.  I guess I still can’t emotionally, even though I now understand why rationally.  We will all get there, to the point where there’s nothing you can do, you’re going to die, and it sucks no matter what form it takes.  This form sucked in its having-time-to-look-into-options-and-essentially-be-told-“no, we’re not going to let you mother have this option” way.

So yeah.  I hope I don’t have pancreatic cancer, and I probably don’t.  I feel healthy as a horse. Except for this scary nagging spot of pain.

Christopher Street Then and Now

4 thoughts on “View From I Have a Cat on Me”