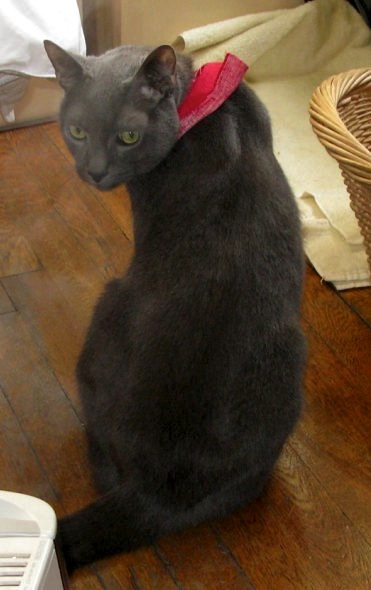 This picture is from yesterday. I’ve since taken the scarf off. That fog on the left is from the humidifier that is on 24/7 in my apartment.

So Buddy didn’t really eat much tonight. I’ll see if he eats more when I get home. I’d rather he had eaten well, but I’m not going to panic. Or at the very least not appear like I’m panicking. I didn’t break down and give him babyfood because the oncologist felt it was time he ate catfood again. He loved the Hills I/D yesterday and this morning, but not tonight.

I’ll pick up a selection of different catfoods tomorrow, focusing on whatever looks irresistible and is probably crap. I’ll get some tuna too. And some chicken to cook. (Always fun for a vegetarian.)

Tonight is choir practice and we’re working on Brahms Requiem. I’m just so glad I’ll be able to sing about death without it feeling so imminent. Even though it is, but you know what I mean. If it weren’t for this optimistic oncologist I’d be fighting tears all rehearsal long and thinking, “Buddy’s going to die, Buddy’s going to die,” and “the last time I sang this Veets died.” Something that is usually so uplifting would have been filled with doom.

These Are the Ones Who Lived

“It is every artist’s secret …”

7 thoughts on “Chemo Cat is Beautiful!”