Long story short: The Time Warner guy came yesterday and said I needed to replace my box and gave me the wrong address to go to get a new one. I go to the right address and get a new box, and even though it had no instructions and I had to change a lot of non-intuitive options (aspect ratio and output resolution?), I installed it.

The online guide for all the shows doesn’t have anything listed past midnight on Friday. I call and they say it will take a couple of hours to update. When it doesn’t update a couple of hours later they change that to 24 or 48 hours.

At 8 when it doesn’t record the shows I had set to record, I call and they re-boot the box and now it’s able to record. Except now I’ve lost my favorite show, Bones, and Big Bang Theory. They say a tech has to come out on Tuesday to figure out the guide thing, and I say, “Shouldn’t I get a new box? A tech was here today and checked the signal and said everything here is fine except the box, so doesn’t this indicate that something is wrong with this box as well?” “If you think that will fix it, you can go get a new box.” “No, I don’t want to guess, I’m not an engineer. What would the tech be checking when he comes?” “The signal.” I ask to escalate the problem, to speak to an actual engineer and I’m told I can’t.

Also after his re-boot all the programs that were set to record were no longer set to record, so I had to re-do that.

The box records Fringe, then an hour later it reboots itself and the recording of Fringe is gone. Also, once again everything else that was set to record is no longer set to record.

A tech is scheduled to come on Tuesday. That was probably my most boring post ever, but I had to get that out of my system. Oh, but the pixelating thing didn’t happen! So something really was wrong with the first box.

These are not real babies. They are plastic movie-shoot babies. Stunt babies. (See post below). 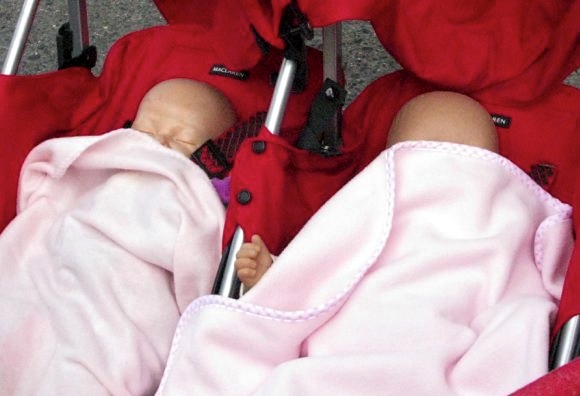 My Desk Has a Cat On It