Christ. The Army sends these guys out to the Arctic, and if it weren’t for the wife of the head of the expedition, they would have just left them there. But she got all this publicity and so they had to make an effort to rescue them. The Army was mad about how they had been embarrassed by the whole thing, for abandoning the men, and so they took it out on the men, taking years to pay them, etc. This kills me. They’re the bad guys, but they punish the men.

The documentary also showed how Greeley, who had been a bit of a jerk, and had crumpled under the adversity at first, hiding in his sleeping bag, etc., eventually rose to the challenge. He became strong, and compassionate, and the men who had said terrible things about him in their diaries came to love and respect him.

Don’t you wonder what you’re made of? I do. I’ve never been tested like that. The relatively minor tests I’ve gone through in life have brought mixed results. Sometimes I’m strong. Sometimes I’m a whiner. Oh! Oh! That reminds me, in a recent Bones episode Caroline said to Sweets, “We’re all just people, cherie.” It brought tears to my eyes. I watched that scene three times. I always think I have to be super-human and I loved the idea of letting go of all of that and allowing myself to just be a person.

Buddy yawning. Every time I try to catch the cats mid-yawn it comes out slightly out of focus. I think because I get so excited and I only have a split second and I never manage to calm down and focus before shooting. 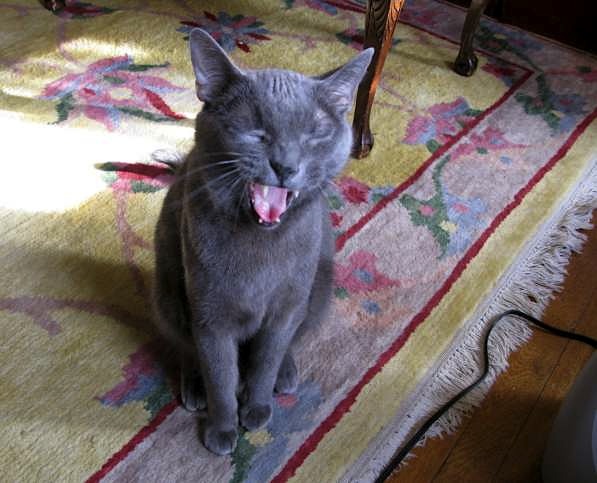 In Fields Where They Lay

Nature is too nature-y for me!

2 thoughts on “PBS Show about the Greeley Expedition”