Ha! It was a Wetpaint party and I went because a friend is the editor-in-chief. Page Six is the gossip section in the New York Post:

“Tinsley Mortimer screamed at boyfriend Brian Mazza at the Wetpaint Entertainment first-anniversary party at Espace Wednesday night after he bit her lip while kissing her. The blond socialite was heard screaming, “You bit me!” — and dropping the F-bomb — at hospitality executive Mazza. After a quick stop in the restroom, Mortimer cooled down and swanned out of the party. She e-mailed us, “I was upset because it actually did hurt, but we were just joking around! Nothing knew [sic] for me to use the f-word for good times and bad! We are very happy and moving in together this week!” The couple has been dating for more than a year.”

New tv update: American Horror Story was too lurid for me. I don’t mean sex-stuff lurid, in fact, I’m not sure I can easily explain what I mean. The show has this film of ickiness that I do not like. It’s not scary it’s just unpleasant.

Another shot of the Wall Street protesters in Zuccotti Park, a more relaxed moment: 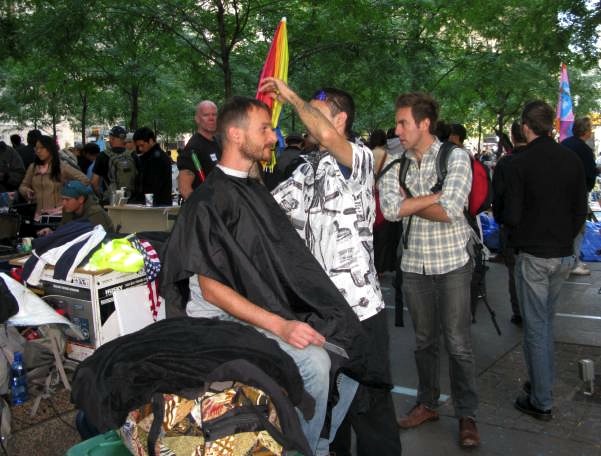 A Miracle on Perry Street and at the Vatican

Damnation Island Goodreads Give Away