Travel writer Daisann McLane (whose Ghosts of Hong Kong article won the 2011 Lowell Thomas Travel Journalism Gold prize) recently tweeted about how realtors in Hong Kong list apartments where people died, mostly by suicide. I just read through a page. I noticed that a lot of them killed themselves by “burning charcoal,” which I’ve never heard of. According to Wikipedia burning charcoal in a small, closed room is a popular method of killing yourself because it’s supposedly painless (although it might not be). Oh, the method was invented in Hong Kong!

“In order to prevent charcoal burning, the Hong Kong Government replaced the traditional countryside charcoal barbecue with an electric grill. Some non-government organizations worked with charcoal retailers to promote the message of “treasure your life” by putting “seek help” labels on the charcoal bags.”

Here is a sample:

“Young female texted and asked her boyfriend to meet her but he sent his sister instead. Victim jumped off the building in front of the sister.”

“99 years old male jumped off the building with no clothes while his wife went to the washroom.”

“Primary school teacher who broke up with her boyfriend, jumped off the building with a thick make-up.”

“Angry male chopped his ex-lover and jumped off the building.”

You can read more here.

A pawn shop on 14th Street. Lately I’ve become fascinated with pawn shops. The next step is actually going in one, but for some reason they also frighten me so I’m working myself up for it. 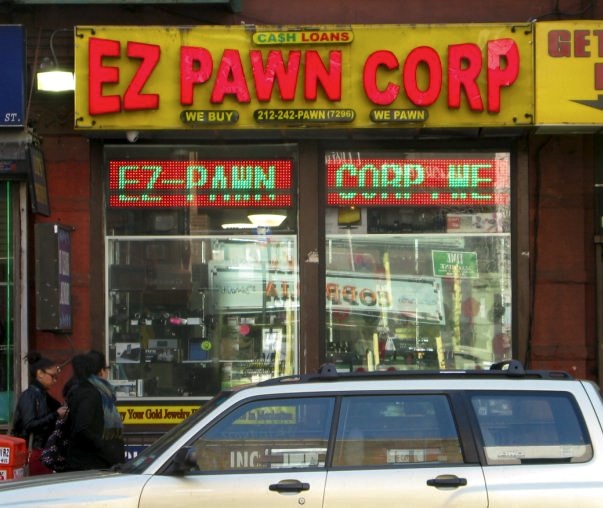 Bodhi and Bali’s Home During the Day