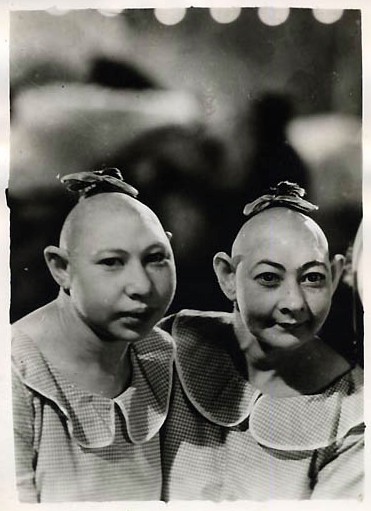 I’ve known about the Prelinger Archives for many years, but I wasn’t aware of just how much of their collection was available online! It’s a treasure trove! I just watched the Coney Island one and caught a glimpse of Pip and Flip, who I always thought were Zip and Pip. From the Coney Island website:

“Pip and Flip were twins who were often advertised as coming from the Yucatan of Mexico (although sometimes also from Australia). They were actually born in New York and the sisters ‘real’ names were Elvira and Jenny Lee Snow. They suffered from the birth defect of microcephaly which contributed to their “pinhead” physicality. They often worked in Coney Island side shows during the 1930’s. They appeared in the 1933 MGM movie Freaks, directed by Tod Browning.”

There’s a film defending the WWII internment of Japanese Americans, another called Symptoms in Schizophrenia, which “Shows masked mental patients enacting various schizophrenic symptoms as they were understood at the time. A disturbing film that raises questions about the condition and treatment of its subjects.”

Seriously, you need to explore what they offer. My post doesn’t even begin to cover what they have there. Yikes! I have to leave for swimming!

A blizzard is coming!! YAY!!

Rio+20: Richard Black is Freaking Me out. Plus, Gamma Ray Bursts.