There has been a strong response to the group of school kids who threw garbage into the 9/11 memorial pool recently. I am not saying they shouldn’t have been stopped and reprimanded, but I think there’s been some over-reaction here.

I read one of the comments of one of the kids involved. Even though he wasn’t being particularly apologetic, he was mostly defending himself, something he said made me think. I pictured myself at that age at a World War II memorial. I would not have comprehended what was being memorialized there either, or how people who’d lost friends and family might feel. Intellectually I would have, but not emotionally. I don’t think I would have experienced the kinds of emotions that would have quieted me. I might have behaved, but I could also see myself acting like a stupid kid too. Especially if I was with a bunch of friends and we were in a particularly stupid mood. I was not evil. Those kids who threw the garbage may or may not be bad kids, we can’t know from this one act alone. Do we react like this when people behave similarly at the Vietnam veterans memorial a short walking distance away? Do people even know there is a Vietnam veterans memorial that close by? (It’s at 55 Water Street. More info here.)

For the record, I was a 9/11 volunteer for almost the entire recovery period. It’s true I’m influenced in part by my own preference for living memorials. I love the memorial pool (which I still haven’t visited, have only seen in photographs and videos!) but I would also like to see the space become a thriving, active space. Perhaps one where we talk about freedom of religion, or, in my case, the freedom to not practice any religion of all.

Bottom line: I like the idea that while I am there, reflecting on my own thoughts, I might be surrounded by laughter, and kids acting out (but not throwing garbage) or people talking or arguing. That would comfort me more than a muffled silence.

I say this with all respect to my friends who feel differently. I know you want to honor the people who died, and the response to that terrible event.

This is a view of One World Trade Center, I took it as I was walking home on Hudson Street. 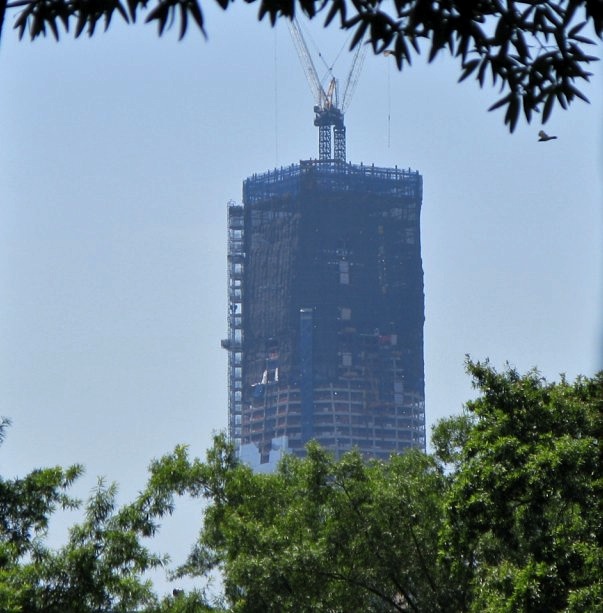