DNA. A few days ago it was all over the news that a match had been found between DNA found on a chain used in a March Occupy Wall Street protest in a subway station, and the DNA found on the cd player of murder victim Sarah Fox, (her cd player was found in the park where her body was recovered).

I started to post about it because I read a quote from an expert in criminology, who called the DNA analysis a huge clue or a big break, which was kinda insane. First, all you could really say was that someone who touched the cd player also touched the chain.  Period. It wasn’t necessarily the killer.  I mean, it could be the killer, but even then the pool of suspects would have been narrowed down to the people who took the subway at the station that day in March. That’s a huge number of unidentified suspects—hardly a big break in the case.

Then, it came out that the DNA came from an NYPD employee assigned to the Office of the Chief Medical Examiner! Anyway.

Philip Glass Sing. Here is the NPR video of the Philip Glass sing I didn’t go to (it was 1,000 degrees out and my camera was broken). I missed out. And the soprano, Rachel Rosales, is amazing.

Red Burns and Michelle Obama. The Smithsonian’s Cooper-Hewitt, National Design Museum chose Red Burns as this year’s Design Patron (Red is the former Chair of NYU’s Interactive Telecommunications Program, where I went to grad school). There’s a luncheon today at the White House to celebrate her selection and the winners of the 2012 National Design Awards. The big question of course is: what will they both wear??

My friend Howard shopping for fruit. 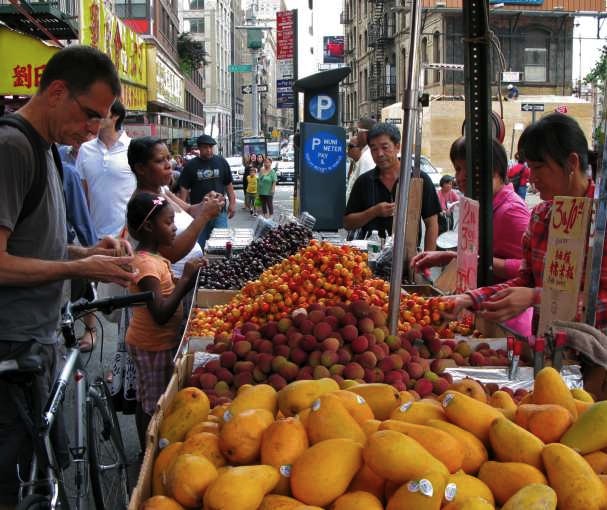