I’ve been researching pigeons and I read about how the last wild passenger pigeon was killed in Ohio by a boy with a shot gun. I was all prepared to hate him and vilify him in my book (if I get to write it) but when I researched it, I didn’t get any sense that he was a bad kid. He saw a bird he’d never seen before and he asked his mother for permission to shoot it and she gave it.

This is what I don’t understand. Why was his reaction to shoot it? If I was in a similar position I might have wanted to catch it and keep it, also not a great idea, but never in a million years would I have thought, “Oh wow, a bird I’ve never seen before. I can’t wait to kill it!”

Someone close to me (don’t want to name names) used to be a hunter, and it was something I could never wrap my head around, because he’s so nice otherwise. Sweet, really. I could more easily imagine him freeing an animal from a trap and taking it to the vet to have it’s leg mended before I could see him killing anything. Last week I learned he hasn’t hunted for a while. He’d had an awakening about hunting and was now filled with guilt about all the hunting he’d done. I don’t want him to be filled with guilt, but I was enormously relieved. It never made sense to me.

I guess it must be similar to how people rationalize killing other people. They are bad (ie, pigeons are rats with wings) or some other reason why the creature’s life isn’t valuable. Or that they don’t hold on to life and want to live every bit as much as we do.

Pigeons on the building across the street. Don’t worry little guys. I’m unarmed. 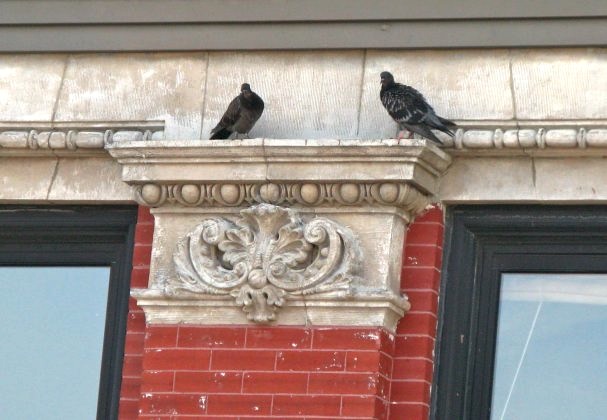 Note: You can’t add comments to my blog right now.

I need a Nap