Many of you are probably aware of the big art theft that took place at the Isabella Stewart Gardner Museum in 1990. The FBI recently announced that they know who the thieves were. I hope that means the artwork may actually be found and returned.

I went to the School of the Museum of Fine Arts, which is roughly diagonally across the street from the Gardner Museum. I’ve probably posted about this before, but I used to go to that museum a lot, and what I always did at one point during my visit was sit down and stare at their Vermeer (The Concert). Unlike any other painting I’ve ever viewed in a museum, this one was mounted in a frame that is meant to sit on something rather than against the wall, and in this case it sat on top of a desk. A chair was provided and you could actually sit down right down in front of the painting, just inches away, and look at it at eye-level.

I took advantage of this and stared and stared at this painting, becoming intimate in a way that I rarely could with other famous paintings. There was a time when I probably could have recreated this painting from memory, if I had the talent, which I didn’t, but you get my point.

So I took it very personally when this painting was among those stolen. I don’t want to get into a whole self-righteous rant but it, but fuck you, you asshats, whoever stole it and whoever paid them to steal it. Criminals. I mean, most of us have done things we’re not proud of, and we rationalize our actions, but the mindset and character of people who rise to this level of wrong-doing (and much, much worse; rape, murder). How do you live with yourselves?

I saw this yesterday, on a stoop, I forget the block. Am I in pursuit of magic anymore? I guess in some areas I still am. I’m working very hard on a book proposal that I hope will be magical, albeit very darkly magical. I just googled it and this graffiti is the work of these artists. 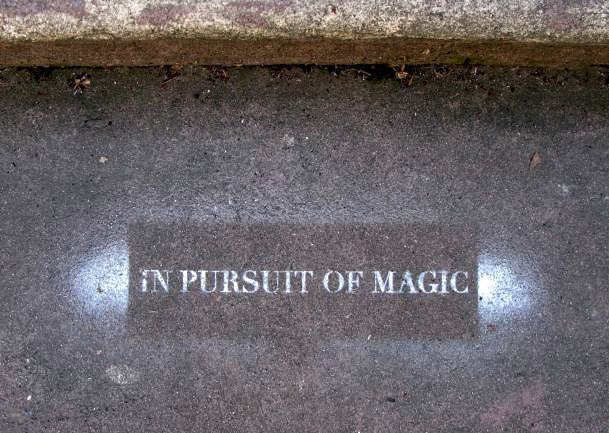 Things that Made My Days