As I’ve been emailing people the link to my TEDx talk about singing, they’ve started sending me links back! An unexpected pleasure, and a great way to get to know the people I’ve been contacting.

First up, a video that was sent to me by Louise M. Pascale, the Founder and Director of the Afghan Children’s Songbook Project. The video is called Voices of Afghanistan. Just try to get through it without welling up. I can’t describe it better than the YouTube introduction in the video. “Afghanistan, for most people, conjures up images of war and terrorism. It is rare to hear a positive story. This video does just that. Afghans cherish their children and they cherish their music …”

Next, the Harding University Choir sings in the reptile house at the Cincinnati Zoo. On their visit to the Zoo the students noticed that the acoustics in this room were particularly great and so they started singing. I want to sing to alligators, too!! It was so cool of them to follow their impulse like that. How can you not love these kids?

This next link isn’t to a video, but choral music professor Rhonda J. Fuelberth’s page is titled Singing Together is Better, something I also believe, and so of course I like the vision outlined in her pages. Which reminds me, there is still time to nominate people for the Grammy’s Music Educator Award. The deadline is March 31st.

Finally, we have a video titled, The Haunted Bay: The Paranormal Side of San Francisco. It’s an interview of medium June Ahearn.

When I researched the Parapsychology Laboratory of Duke University I found the results of experiments that had been conducted in 1934 with medium Eileen Garrett. In the second round, to eliminate fraud the sitters were put in adjacent rooms, so that they were out of sight and sound while Garrett conducted her readings. When the scientists evaluated the results, the number of things Eileen got right were still far greater than would be expected by chance. However, for J. B. Rhine, the head of the lab, the question about where she got her information remained. Was it from the dead or through the living via telepathy (aka ESP)? That said, Rhine believed there was evidence for some medium’s abilities, he just felt they didn’t know enough about them.

I came across what I thought was an elaborate doghouse in someone’s front yard in Brooklyn (do we call them yards when they are concrete?). Turns out, it’s a cathouse. You can’t see it but there was a cat inside when I took this picture. 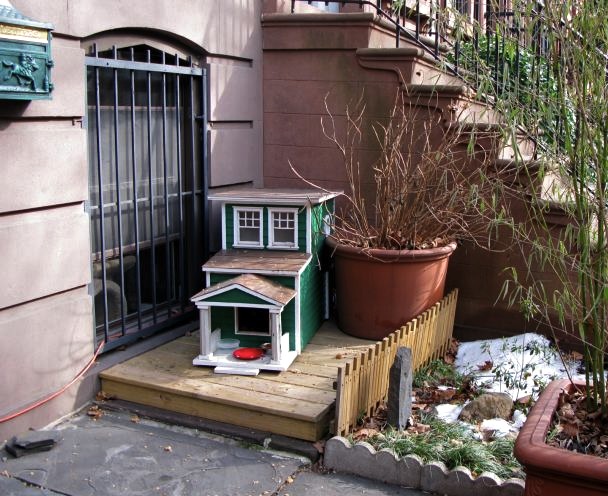 We made the fence!