I love watching The Bachelor and the Bachelorette, and Andi was on her way to becoming my favorite Bachelor/Bachelorette. I’ve always marveled at how the people on this show never ever ever ever have a conversation of any substance. They never talk about books, art, current events. And they still don’t, but Andi did seem on her way to raising the level of discourse. She recently asked one of the men on the show about the root of one of his problems and actually got him to talk about himself in something other than cliches. I’m pretty sure that has never happened before.

But the season has been hard to watch because one of the people on the show, Eric Hill, died soon after filming. In the most recent episode it got truly horrible. Eric pulled Andi aside and said something to her so completely real, something completely fair and reasonable, it was great. In response Andi had a meltdown. Her reaction was just so insane and over the top. She clearly misunderstood what he was saying. I think she’s just stressed. (I started to try to explain what happened, but you really need to watch from the beginning to understand.)

Anyway, the point is he raised the level of discourse. He also said one of the most truly real things that has ever been said on this show. AND, the gracious way in which he handled her meltdown is also unprecedented on this show. He had originally approached her to defend himself, and he was right to. But when she freaked out in response, he let her vent. He tried to calm her but he could see that in that moment she was beyond hearing or understanding. She was too upset right then to comprehend his point of view and addressing that, so he stopped trying to explain. He also did it in a way that showed his capacity for compassion and dignity.

I’m not trying to demonize Andi. I still think her reaction was insane, but again, stress, misunderstanding, and who hasn’t over-reacted in their lives. Also, the only other person to say something real was Andi herself, on her season with Juan Pablo.

It’s just that to watch that interaction, and to know that this wonderful person is no longer living was terrible. I can’t even begin to imagine what it was like for his family and friends. It highlighted how great he is, and now he’s just gone.

I changed my mind about what picture to post in light of this topic. This is a dog I photographed in Central Park the other day. I will always remember how at the end of Jon Stewart’s first show after 9/11 he pulled a dog out from under his desk and said something along the lines of, “Here is something we can all use right now. A puppy.” 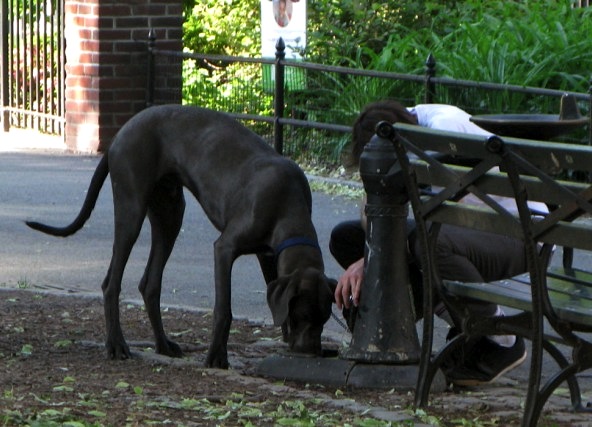 4 thoughts on “The Bachelorette – What the Hell?”