I’m really sorry to miss this first one because it’s an open sing of contemporary choral composers, something I want to explore. “The reading session will be led by Fahad Siadat, director of See-A-Dot Music Publishing and C4: The Choral Composer/Conductor Collective, a professional new music chorus, and reinforced by a string quartet that will accompany the reading session. Gathered singers will rehearse and perform six pieces over the course of an hour.”

The second one is titled And Death Shall Have No Dominion, a participatory singing event for a synchronized headphone choir, conceived and composed by Pete M. Wyer, with accompaniment by the Asphalt Orchestra.

The four different voice parts are going to meet at different parts of the city and start singing and walking. “Little by little, as routes converge, the song is revealed in its fullness until eventually, everyone assembles together for a grand choral finale at the gazebo in Rockefeller Park.”

I just looked at the score, it’s definitely written so that anyone who can sing can do it. The sopranos are starting one block away from where I live! Except you have to have a smartphone, which I don’t have because I am poor. But I’m going to walk along and film them and listen. Oh, I see that people without iphones can download the audio files. Except my iPod is broken (and I can’t fix it because, blah, blah, blah). I might have an old one that still works though. I’m listening to the bass part now, it’s beautiful!! Actually, this piece is simple enough, I don’t need to hear it to be able to sing it. Well, I’m going in any case. What a great idea, I love that all the different parts will be walking along singing, and then come together.

Sad sign. I hope Lila was found. Also sad is the fact that she is declawed according to the sign. Declawing is actually amputation, they remove the last bone of each toe! It’s an incredibly barbaric and cruel practice. Keep their nails trimmed instead! Also, I’ve always had good luck with the Felix Scratching Post. I’ve never had a cat who didn’t love it and use it. Seriously, how is this cat going to defend itself now? What if you lose your cat during a the zombie apocalypse?? Never declaw! 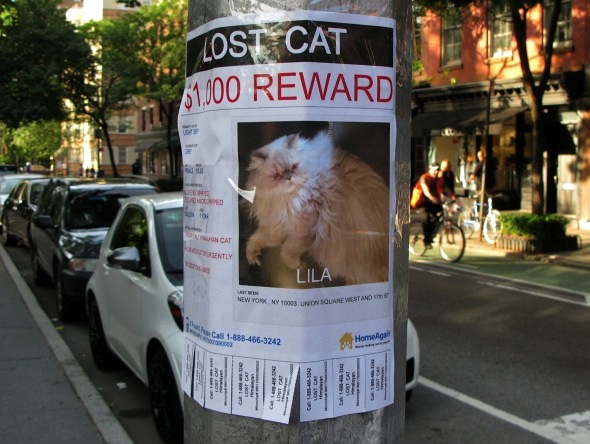