Holy mother of God. Have you all read this? If not, READ THIS BOOK. Lawrence Wright is such a great writer, such a brilliant researcher. I will always love him for writing the sentence below. It’s from his book about 9/11, The Looming Tower. Wright is describing the CIA and how it would not share information with the FBI. However I must point out that the FBI is guilty of being the exact same way with the NYPD. I laughed when I first read these words though, a laugh of horror about how un-exaggeratingly true they are.

“… the agency was a black hole, emitting nothing that was not blasted out of it by a force greater than gravity …”

But back to Going Clear. It’s a history of Scientology, and what I learned was so terrifying and so jaw-dropping that when I started to talk to someone about it I felt a jolt of fear. “Are you a Scientologist,” I asked the person, before continuing.

I’ll never forget when a bunch of Scientologists surrounded us on the highway, after 9/11. The West Side Highway was closed down except to recovery vehicles and we were there holding up thank you signs to the workers as they went in and out of the site. Sometimes the workers would stop and chat with us after their shifts. A group of Scientologists walked up, circled us, looking for all the world like a bunch of big cats eyeing their prey. I swear to God that I’m not saying this in hindsight, I immediately felt threatened.

“Who are you?” I asked. They wouldn’t say! But I kept insisting and finally they said they were Scientologists. They left soon after. I’m sure they thought SP (suppressive person) about me, or Potential Trouble Source (these are real Scientology terms). They were there to offer a detox program, which, like everything else in “Scientology,” has no real basis in science.

I appreciate the position our government and the IRS were in but they certainly dropped the ball with respect to Scientology. Anyway, the book is an exhilarating read, and I recommend it highly.

Bleecker, known in our house as “the destroyer,” comes upon another famous destroyer, Godzilla. 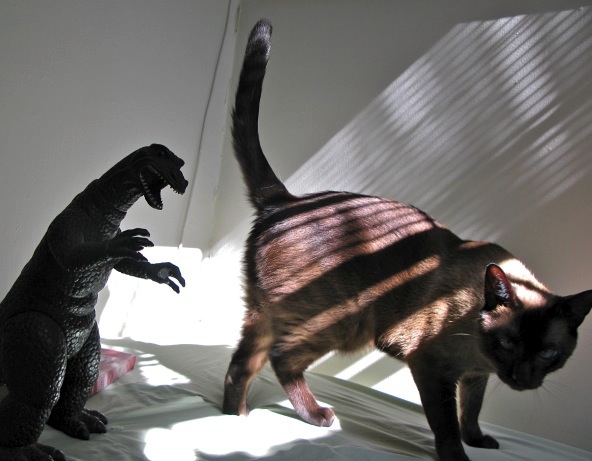 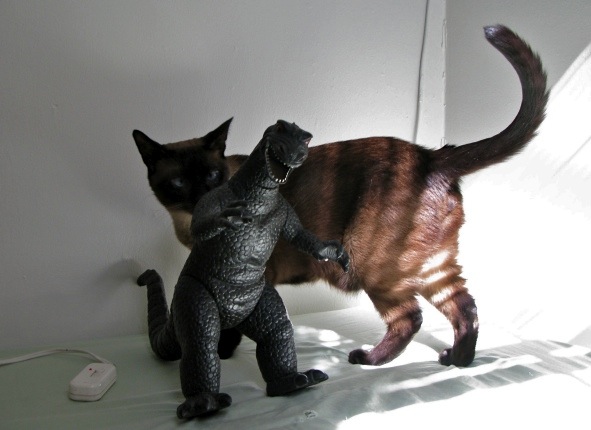 Newsroom Filming in the Meatpacking District

Warehouse 13, Let Us Renew Our Vows