I don’t really have a lot to add about Robin William’s suicide. Only that I went through a severe depression when I was in my twenties, and I remember learning that if you ever experience depression you are at risk for repeat episodes for the rest of your life.

I can’t tell you the terror I felt hearing that. I simply cannot go through that again. I think people who haven’t experienced depression think of it as extreme sadness or something. Not fun of course, but not the end of the world. The reality is, the best way I can describe it is you feel nothing, but it’s the most painful, all consuming, choking, life-draining, horrible nothing you can possibly imagine.

It’s so bad that the thought of enduring it again makes me understand what Robin Williams did. I’m not saying it’s right, I’m not condoning it, I’m just saying I get it. I’ve been lucky. I never experienced depression again. If I went through it repeatedly throughout my life as I hear he did I don’t see how I could last. Far from being weak, Robin Williams must have been a fucking towering monster of strength.

Also, I just realized that when I went through my depression I was young. What would it be like to go through a depression now?? Back then I could tell myself I had decades and decades to work it all out. One more thing, if you drink or do drugs in response to depression you’re doomed. But I am also an alcoholic, so again, if I went through depression on and off throughout my life I can easily see taking up drinking again eventually. (I stopped drinking during my depression and haven’t had alcohol since.) I’d be so beaten down by the repeat episodes I do anything for relief.

I’ve spent a lifetime making lists of things that lift me out of a bad mood. It’s all about forestalling depression. Things like therapy, singing, meditation, doing something nice for someone else, going to the movies, an extremely healthy meal (very effective), sitting by a body of water and reading. But the one thing I’ve found that is the most sure-fire is exercise. I discovered this one late in life and it also took me a while to find forms of exercise that didn’t feel like work, like swimming, my main form of exercise now. No matter how bad I feel when I begin, I’m fine when I’m done. It never ever fails. NEVER.

The thing is, remembering what I was like when I went through my depression, I wonder if I could have made myself exercise while I was right in the thick of it? Depression pretty much completely immobilized me. Here’s what I would tell myself to try to get myself to do it: I know you don’t want to do it, I know you think you can’t, but just do it, just get up and do it, even though every fiber of your being is saying you can’t. As a reward, you can not move for the rest of the day, guilt-free. You’re off the hook. Knock yourself out. Curl right up.

It’s just a theory, but I think if you can somehow manage to make yourself go for a swim (or something else) it would lift you out of that blackness just enough that you wouldn’t want to crawl back into immobility. Maybe pick a movie theatre a decent distance away and walk to it. The movie at the end would be the reward (it’s also an effective mood-lifter I’ve found, even if the movie sucked).

Also very high on my list: pets. (Except then when they die. In which case you must get another pet as soon as possible even though it feels like a betrayal. It isn’t.) Here are my two amazing, wonderful depression-forestallers. 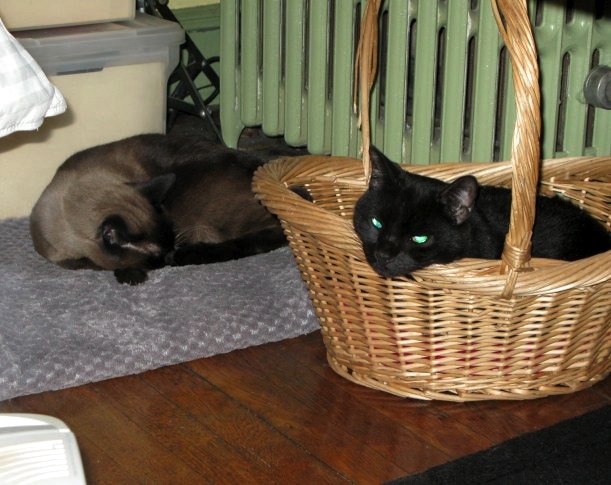 I Think I Have to Stop Watching Criminal Minds

Bleecker on the Speaker

10 thoughts on “Robin Williams, Depression, and My One Tip”