Thanks to a friend in my choir, I’m singing in the house choir for an off Broadway play called The Events. It’s about a mass shooting at a community choir rehearsal. The playwright, David Grieg, starting working on the play in response to Anders Behring Breivik, who massacred 69 students in 2011.

They’re doing something else very interesting. For every performance a different community choir will “play” the choir. For nights when they don’t have a choir, or in case of emergency, they’ve assembled a house choir. I’m in that, so I’m actually going to get to do it more than once. I just found out last night that some of us will also be given lines, but we won’t know who until a couple of hours before the performance.

I just tried to cut and paste some lines from a review in The Guardian, which called it the number one best play of 2013, but for some reason my stupid computer won’t let me copy and paste the text. They loved it though. I will see it for the first time when I’m in it, and that’s what the people producing the play wanted.

Here are some of the choir singers, waiting for rehearsal to begin. 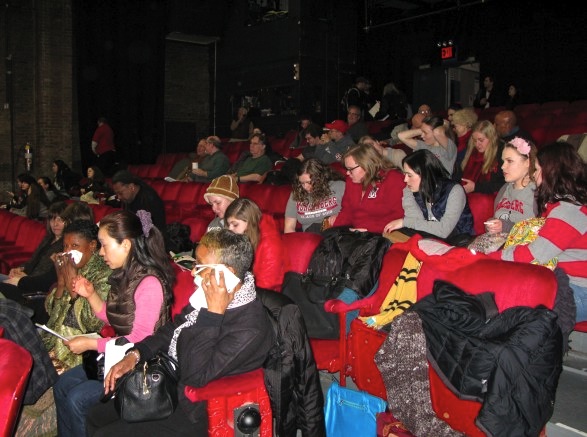 Choral Music on the Radio