I copied tons of 19th century indictments from the Municipal Archives, and out of God knows how many I picked two to write about for my book about Blackwell’s Island. The thing is, I copied each of the other indictments for a reason. Something about the case drew me in. There was one case I copied years ago, and I’ve actually told her story in this blog before, Minnie Marquies. But I have a little more information now, and pictures.

Minnie Marquies, an 18 year old immigrant from France, was brought in on April 14, 1892, for starving her three children, Joseph, Harry, and Dolly, “so called although a boy,” the indictment read. Elbridge T. Gerry, of the New York Society for the Prevention of Cruelty to Children, decided to prosecute. (In those days the D.A. often authorized the Society to represent the City in court.) From the Society’s case records:

“Horrible is an exclamation that hardly expresses the conditions attendant upon the discovery made by an officer of the society who had been detailed to investigate a case of gross neglect existing in a tenement-house at No. 156 East Ninety-eight street.”

The officer found “A wretchedly filthy room in the basement,” and “a scene that could not be obliterated from the memory for years to come. Three children — the eldest not over 5 years of age and the youngest, a mere infant — lying on the floor without a remnant of clothing to cover their little forms, and in as pitiable a state as the utmost misery could place them.”

“James, the eldest, trembled violently [the oldest boy’s name was actually Joseph] … while Harry, aged 3 years, was so reduced by starvation that he had the appearance of a three months’ old child, and his tiny limbs were unable to bear the burden of his body, and the baby was nearly unconscious from extreme neglect and lack of nourishment.”

“It is hardly necessary to say that the society vigorously prosecuted the young woman on a complaint of endangering the lives’ of the little ones. The statute was not severe enough to meet the abuse inflicted.”

Dolly and Harry. (More of the story below …) 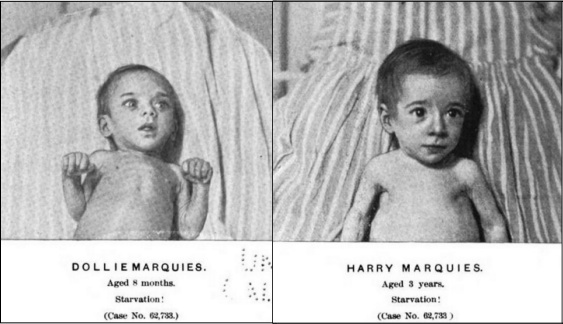 It sounds bad, but when I looked into it, Minnie’s story is so awful and sad I’ve always wondered how she and the children ended up. First, the Society already knew her. She’d been in court with them years before when the Society prosecuted her step-father, who had been mistreating Minnie and her sisters Cecilla and “another daughter who was early put out to service.” The step-father was packed off to Sing Sing, Cecilla was sent to the Convent of the Sisters of St. Dominick, but they don’t say what happened to the unnamed daughter and Minnie. However, the Society did say that Minnie was actually Irish and that she was 22 and not 18 (which I was later able to verify).

When she was only 15 years old, Minnie married a guy named Joseph who went insane and shot himself the day before Minnie’s first child (Joseph) was born. According to the indictment, which is very hard to read, the other child Harry was the son of Harry Stetz, “a colored man.” It doesn’t say anything about who fathered Dolly, but one newspaper account said his full name was Dolly Diaz. It also seems that Minnie walked with a limp, and that she may have been mentally challenged. A neighbor told the arresting officer that Minnie and her mother Catherine went out every night, the implication is they were prostitutes.

So you’ve got a mentally challenged 22 year old with a physical disability, who already has three children, was abused as a child, and is now making a living as a street-walker because a girl like that had no other options in the 19th century.

I think you can see why I am haunted by her and her poor three children. Minnie was ultimately tried in the Court of General Sessions, and was sentenced to one month in the Penitentiary. It indicates that the Judge had some sympathy for her, even though the Society for the Prevention of Cruelty to Children seemingly did not.

What happened to Minnie and her children after that?? The doctor from Presbyterian Hospital said the children were suffering from starvation and rickets, and that their legs were crooked due to untreated rickets. A newspaper account I found said that Harry was expected to survive, and that Joseph had already been placed in an orphanage. Sadly, according to the case records from the New York Society for the Prevention of Cruelty to Children, Dolly died.

I found Minnie and her mother and sisters in the 1880 Federal Census. The unnamed daughter was Sarah, and she was eight years old at the time. Cecilla, who was listed as Celia, was five, and Minnie, the oldest, was ten (proving the Society’s claim about her real age).

I haven’t found any more records for Minnie or Harry so far, but Joseph shows up one more time in 1900, when he was 13, in Sister Agatha’s Home for Children in Rockland County. Maybe Joseph ultimately had a life. I plan to keep looking. Haunted!

Oh, it says that the children were taken to Randall’s Island, and the Municipal Archives do have some records from that period for Randall’s Island (the City owned the Island and there were hospitals for poor children there, among other things). Maybe I can find out something more about Harry.

I just looked up and found the prison record for the step-father (Nicolo Cappelo) who went to Sing Sing. The charge was attempted rape! He was sentenced to seven and a half years.

A section from Minnie’s indictment. 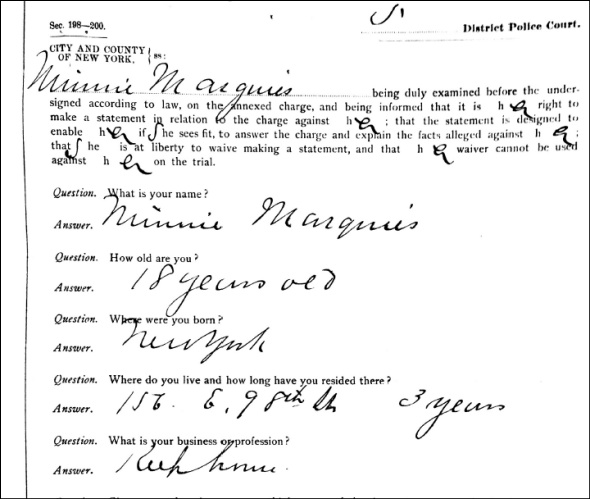 Linda in the Red Dress

One thought on “The Story of Minnie Marquies”