I woke up to learn that New York had passed the gay marriage bill (and that Neil Patrick Harris is engaged)! New York does the right thing!! Looks like I really must join my band Manhattan Samba and drum in the Gay Pride Parade this year (it’s tomorrow). I usually do, but it’s a marathon thing and I’m getting old! Hours and hours of drumming in the blazing heat (usually).

But it’s my favorite parade because it’s just the most joyous happy thing. Every year on that day all the good will in the world is packed into those blocks of Manhattan. There’s cheering and screaming and clapping the whole way down, and when you get downtown and turn west off 5th Avenue you hit a wall of cheering that never stops. There are no words to describe how great it feels. The first few years I felt guilty, like I was stealing someone else’s cheers (I’m not gay) but finally I thought no. I’m marching and drumming in celebration of pride so I get to share in the cheering too.

UPDATE: Apparently Neil Patrick Harris has been engaged for five years. He’s been waiting all this time to be able to marry.

This guy was playing the piano spectacularly well outside the library yesterday. The piano was put there by an organization called Sing for Hope. Sing for Hope is a group of artists who volunteer at hospitals, schools, etc. The piano is part of an installation called Pop-Up Pianos and this is the story behind this particular piano. 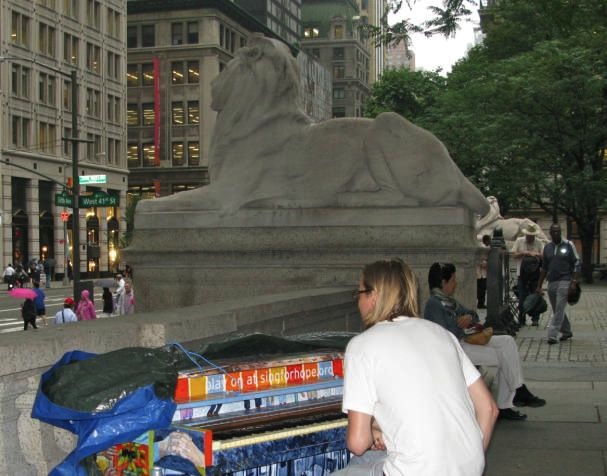