I’d been working on a book proposal about wildlife rescue when I learned that someone else just sold a book about the very same subject. It’s fine, there are plenty of books out there to write, but I wanted to do my bit to draw attention to a wonderful group of people. The following is just one story of many.

The call came in on Sunday evening, April 29, 2012. A pigeon was hanging upside down from a tree in front of a church on 13th Street in the Village. As the caller watched, the bird desperately flapped its wings among the tree’s fernlike leaves, trying to free itself. Occasionally it would stop and sway quietly, taking a rest. Then it would resume its frantic beating. Horribly, this only sent it uselessly spinning in one direction or the other.

And on it went. Struggle. Rest. Struggle. Rest. A descendent of the very same bird who brought hope and salvation to Noah and all mankind in the form of an olive branch, signaling that dry land had been found, was ensnared by one of the simplest artifacts of man, a piece of string. Worse, its frightened, panicked efforts were beginning to slow down.

Al Streit, one of the founders of New York City Pigeon Rescue Central, took the call. He immediately posted to the group’s private online forum. This generated what is known as a Bird Down report. Technically, this bird wasn’t down, but he was in trouble.

Going west from 7th, it’s the second tree on the right. Vincent [the caller] lives near and will look again in the morning. He estimates the bird is 30 or 40 feet up. He couldn’t see what kind of bird it is. It’s high, but we have poles that can reach. This job needs a crew. The poles are aluminum and not steady when extended that far.

Dave, you have the best equipment. Can you do this rescue in the morning? I can meet you. Anyone else? If you can’t go, I will. Who can help?

If nobody responds to this call, I would ask Vincent if he can help and also contact the local fire departments. Sometimes that works as we know and if you are diplomatic about it (saying things like this bird is in an emergency situation, you understand that if they (the fire department) gets a people emergency they need to respond to that first, and that they are doing a good deed, etc., it might work.

Could it possibly be sitting on a nest? I am not far. I should check it out if I have time. I have a pole, but lost it somehow during the Freddy 9/11 Memorial rescue.

Uh-oh, my squeaker Billy has discovered has fascinating computers are …

Maria [not her real name]

Maria, I’ll meet you, but you may be there first.

You’re right, the bird could be in a nest, especially if Vincent saw it at dusk or when it was dark. But up to now, these reports have been accurate.

And equipment. Your rescue pole is gone, but I have some I can tape together. My nets broke while rescuing, but I bought a very small one, which I’ll bring. So could one of you bring a good net?  I have gaffer’s and duck tape and will bring a bottle of water, Pedialyte, scissors, and a swiss army knife.

And shout out to Dave—your set up is the best I’ve seen, so I hope you see this and have time this morning!

Jennifer, I didn’t mean to ignore your idea. It’s a good one. So, if we can’t reach the bird, we’ll try Emergency Services or the fire people. Sarah [not her real name] got FD to rescue a pigeon, and Dave and I got an ESU to rescue another one.

Someone please look up which fire station is closest.

I’m leaving in a few minutes.

Still there. About 30 feet up. A pigeon. Still moving. I bet it recognizes him and knows he wants to help.

A fire station is on 18th, 5th/Broadway. There must be a closer one, and we may need to find it. BTW, Vincent is a rescuer but can’t work with us today.

I went to W19th and they were going to call a dispatcher to see what they could do, but in the middle of things, they got called out on an emergency. But the Chief said he would definitely check with their dispatcher.

I can tell you, it’s awful. The bird is 30 ft. up and dangling. But still alive. In order to show people how serious the situation is, I took pix and even a video of it flapping around.

Al has poles and equipment that might work. I just fed my babies and am on my way back down.

Trevor and I can come help get it down but we don’t leave work until 6 and can’t help until then. I sincerely hope you guys get it down before then, it sounds awful. If not, and we can help, please let us know and we will come down at 6pm.

Thank you all who are making an effort to save this poor bird. I wish I could do something myself, but I am keeping my fingers crossed and waiting anxiously for further news.

We did it! Two workers at the church next to the tree used Al’s equipment and went up on a balcony and cut the strings off that were hanging from the branch! It was amazing. There was no way Al and I could have done it from the ground. We tried like hell, but without the extra height, it was impossible.

Amazingly, the bird is in great shape, just in a bit of shock, wobbly on its legs, and very thirsty. I have it here with me at home. Hopefully it will recover in a week or less.

Oh thank you Jesus (and Jennifer and Al and everybody else too).

I was sick today and just got on the net.  So glad this has been resolved.

Thanks be to God!!! I was praying & praying for this poor soul to be rescued soon & for him or her to be okay. Thank you to everyone who helped save this innocent bird. May God bless all of you!

Patricia [not her real name]

Thanks, Maria and Alice [not her real name]. Thanks to Dave for lending his equipment. The tree saw was what they used to cut the string.

Maria, is the leg okay?

Once freed, the bird flew to a fence across the street and immediately fell over. His leg was hurt and he couldn’t hold on. When he tried to walk he stumbled. Maria, a blonde-haired mezzo-soprano opera singer and wildlife rehabilitator, scooped him up and took him to a veterinarian. No bones were broken, but his feet were swollen. Maria named him Ricky, after one of the workers who saved him, and brought him home.

Luckily, pigeons heal fast. By Friday Ricky was fine and ready to be released. Maria put him in a box and took him back to 13th Street, across the street from where he’d been dangling. Pigeons are very social creatures. They live, travel, roost and feed in flocks, and when they find a mate they stay together for life. For this reason, rescuers always take pigeons back to where they found them so the pigeon can return to their flocks, their mates, and their babies.

When Maria opened the box, Ricky didn’t immediately bound out. He thought about it for a few moments. Then he flew to the fence, where he didn’t fall. His feet were strong again.

I spoke to Rick, the assistant building coordinator at The Church of the Village who had actually freed the bird. He’d been watching the rescuer’s repeated attempts to help the dangling pigeon and at one point he couldn’t stand by any longer. “Let me try,” he said. He climbed out onto the balcony of the church, leaned out as far as he could, and using the pole with a knife taped to the end, he started sawing away at the branch that held the pigeon. He’d started at a larger section, away from the pigeon, but he soon found he didn’t have enough force and he had to move to a more slender spot on the branch, one a mere two inches from the pigeon’s impossibly tiny leg. The bird was now flapping and spinning in fear, each spin bringing him closer to the blade. At the same time, Rick’s balance was wobbling as he moved further out, balancing himself and pole that was growing heavier by the minute.

Fortunately, before long, the branch and the bird were free and they dropped into waiting arms of the rescuers below. Everyone cheered, including passers by, who’d stopped to watch the spectacle. I looked at Rick. Every day, if we even bother to look up or down, someone comes upon a small creature in trouble, struggling as any one of us would, to live. Instead of walking on, as thousands of people invariably do, there are a few compassionate souls in the world who stop. They can’t go about their day like they never saw what they saw, or tell themselves that the suffering of one pigeon, or squirrel, or fox, (or dog or cat, and so on) is insignificant. They help. How did it feel when that bird was finally freed, I asked Rick. “It felt good,” he admitted, almost sheepishly. “I felt like a hero.”

Thank you Rick and New York City Pigeon Rescue Central, and all people and rescue groups around the world who stop, and who help.

Here is a short movie of the bird dangling from the tree. Warning: it’s upsetting, but at least you know in this case there was a happy ending.

Here is a short movie of the bird being released.

I took this last night after choir rehearsal. This was near my apartment. I don’t know what these lights were, or where they were coming from exactly, but I thought a rainbow was a fitting ending to this story. 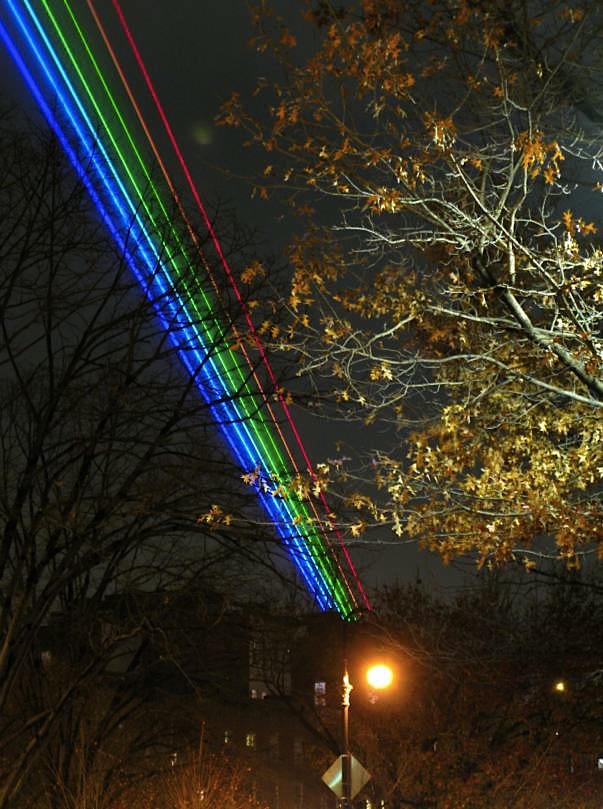 I keep forgetting! Canada!! We’re thinking of you.

Model Shoots Everywhere All the Time

7 thoughts on “A Story of Pigeon Rescue”