I said I wasn’t going to do it but it seems I can’t resist competing. This year’s Lap Swim Contest began last week. There are two contests really.

The first year I did it I won third place at my pool, the Tony Dapolito Recreation Center, and I won second place my second year, which was last year. I can’t win first place at my pool because the best female swimmer in the city, Anna Jardine, swims at my pool. But that’s okay. There’s a dinner party at the end of the summer for all the winners and for everyone who swam 25 miles, and it’s a lot of fun.

I would at least like to beat my own personal best, but I could only swim two days last week and I know I’m going to have to miss more days between now and August 7th. Plus, I am definitely slowing down. Last night I swam as hard as I could and I swam 236 laps (224 is two miles). When I gave it my all last year I’d manage 240 – 244 laps, and once 250 but that was a fluke and I think they gave us an extra minute or two. So, we shall see.

A wedding I passed by while taking a break during the hackathon last weekend. 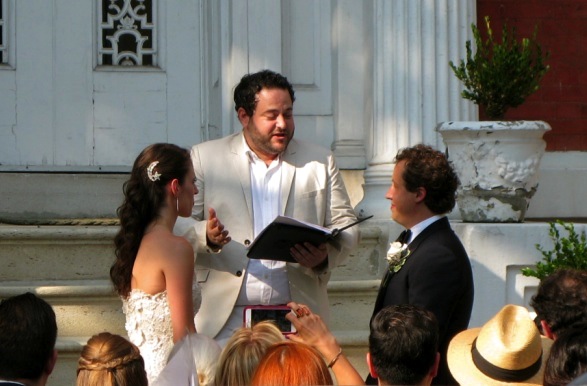 My Spot in the Choir Lineup