I watched House on Haunted Hill last night. This movie terrified me as a child, and I still feel unease watching the scenes in the basement, when the gaslights go out one by one. I wonder where that was shot? I know the outside of the house is a famous Frank Lloyd Wright house (the Ennis House), but I couldn’t find where the basement scenes were shot.

I started googling the actors, and found a few sad stories right off the bat.

Carolyn Craig, who played Nora, killed herself when she was only 36! I can’t find anything about her death, but she got a divorce earlier that year. Maybe that contributed? She’s buried in an unmarked grave which makes her death even sadder.

Richard Long, who played Lance, died of a heart attack when he was only 49.

Alan Marshall, who played the doctor who planned to murder the Vincent Price character, had some sort of “chronic nervous condition which ended his film career.” That part got to me. I wonder if he also got anxiety attacks? He died when he was 52.

Carol Ohmart, who plays the wife who conspires with the doctor to murder her husband (played by Vincent Price) didn’t have an easy life, but it looks like she had a happy ending. Good for her!

Leona Anderson, who played the terrifying floating ghost who turned out to be the blind housekeeper, doesn’t have a particularly sad story, as far as I can tell. She was a former silent film actress, who later made a career out of pretending to be a terrible singer. She lived to 88 and died on Christmas day in 1973.

This is another laundry shot. I took this because this guy waited forever to get a cab. I became utterly fascinated by him, because anyone else, I think, would have searched for a better spot. He was only a couple of blocks away from a much busier corner. 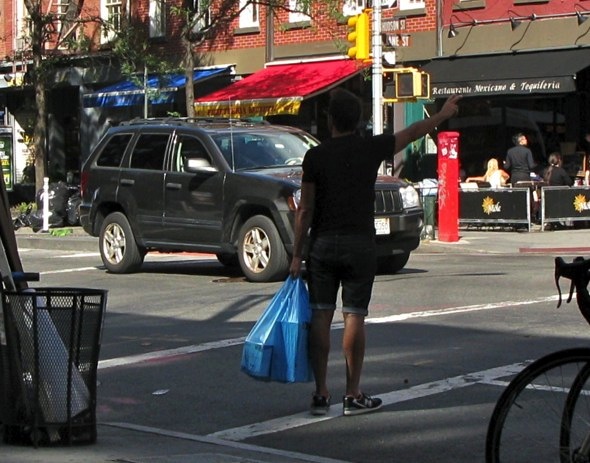 2 thoughts on “House on Haunted Hill”