It’s only going to be a small section in my book, but I looked into the story of Mary Ellen Wilson, a child who was taken from Blackwell’s Island and put into an abusive situation. Investigation of her treatment ultimately led to the creation on the New York Society for the Prevention of Cruelty to Children. I went uptown to the New-York Historical Society to see if I could find the original papers for Mary Ellen’s indenture. It was my understanding that she was indentured and not adopted. An indenture is a contract entered into with, in this case, the Department of Charities and Correction. A child was bound out as a servant or an apprentice, and in return the child had to be fed, cared for, educated, and taught a skill. Anyone taking a child was to report on the child’s condition and progress once a year, but follow-up at the time was lax. At the end of the indenture period the now grown child had to be supplied with a set of clothes, a pair of shoes and a small amount of money.

I was only looking into it because it was insane how easy it was to get children who essentially became slaves. Which is not to say that all people who indentured children treated them that way, or badly.

As you can see from Mary Ellen’s contract, from the couple’s point of view it was an adoption. All terms referring to the indenture were crossed out and filled with in terms describing an adoption, ie, Apprentice was crossed out and they wrote in “Child,” and Master was crossed out and they wrote in “Parent. Thomas McCormick would later claim that Mary Ellen was his daughter with another woman. But I looked through the logbooks and many of the indentures had the same cross-outs. It’s telling that indenture and adoption were handled the same way. 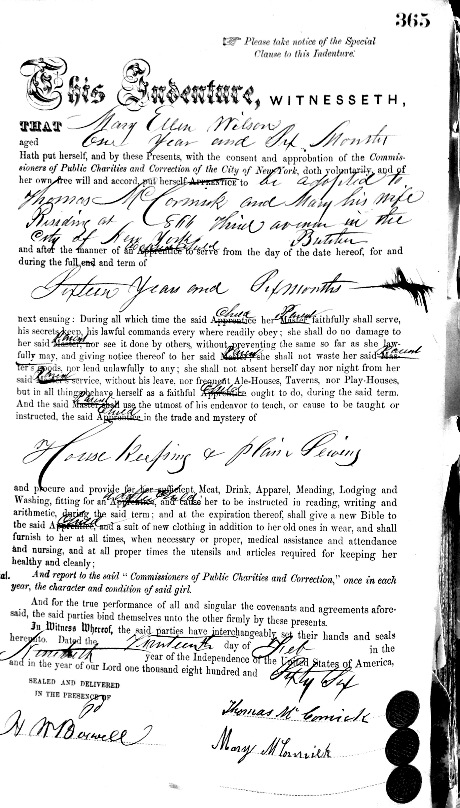