1. New covers. Here’s the cover for the British paperback edition. 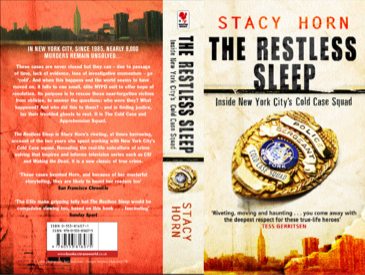 2. Working at home.
3. Getting to see stuff. (Like going to the Property Clerk Warehouse when I was writing the cold case book, or going into the attic of the Rhine Research Center to see the scientist’s old equipment for Parapsychology Lab book.)
4. Interviewing. That can go either way, obviously.
5. Seeing your book in bookstores.
6. Email from people who read your book and have interesting thoughts or suggestions. Or, just say something nice.
7. Meeting with your agent and/or editor and getting to go on and on about all the cool stuff you’re finding out.
8. Amazon and Barnes & Noble stats! Alright, let’s just say from now on it goes without saying that any one of these can go horribly horribly wrong.
9. When someone says something nice about your book on Amazon or Barnes & Noble.
10. Research. Those months I spent at Duke were heaven, even though I was staying in a dreary motel. There is just nothing like being immersed in a story that has grabbed you. It’s one of those, “I can’t believe they’re paying me to do this,” things.
11. Reviews.
12. People quoting you. OH!! There’s a show that I love love love called Bones. They basically quoted me. They used something I had written about a cadaver dog. It had to have come from me — they pretty much used my exact wording, and I had been telling that story all over the place while I was promoting my book. That show keeps getting better and better. (And I’m not just saying that because they kinda quoted me. Ask anyone. I’ve been telling my friends to watch this show.)
13. People saying nice things about your book on their blogs.
14. Getting invited to fun things. I’m hoping I get invited to a seance or haunted house or something for this book. Although that was not what the Duke guys were into. Still. I mean, come on. Haunted houses??

I pretty much think I have one of the best jobs in the world. Although there are other things I’d like to do if I was smarter or more talented:

Work in the ME’s office.
Be a singer.
Some political office. I never used to care about politics, but we are now on such a downward spiral, I wish I could do something about it.